Then Fix It, Dear Henry!

Previous Next
Then Fix It, Dear Henry!

Here’s a common complaint and concern we often receive at the Cemetery: “I see so many fallen headstones in the cemetery. Why don’t you fix them?”

If you’ve traipsed around your share of historic cemeteries then you’re used to seeing fallen headstones. It’s common, and there are a myriad number of reasons that this happens. Time, weathering, and poor construction or materials contribute to deteriorating headstones. And yes, sometimes overall neglect is the primary cause. But the assumption often is that we’re not doing enough with our resources. Not that the staff take these assumptions personally (but yes, sometimes we do), but there is a reasonable explanation for why even though our cemetery is thriving, we still have fallen headstones. 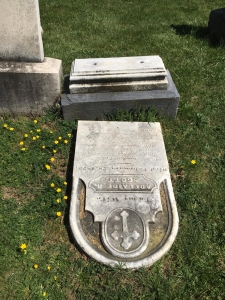 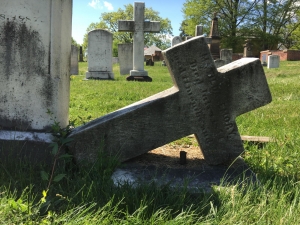 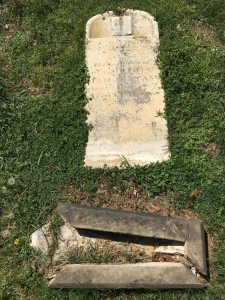 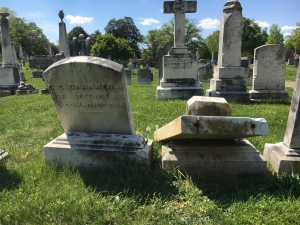 In a perfect world, all of the headstones in the cemetery would be upright, legible, and whole. But consider this: we have over 65,000 interments here, and between 14 and 15,000 headstones marking these individuals. In a 210-year-old cemetery, a little wear and tear is bound to happen.  Congressional Cemetery’s mission is to “preserve, promote, and protect” this National Historic Landmark, and restoring headstones is high on the to-do list. But although it is sometimes difficult to explain to visitors, the first preservation priority is not to fix the fallen headstones. Instead, it’s to stop the precarious headstones from falling in the first place. 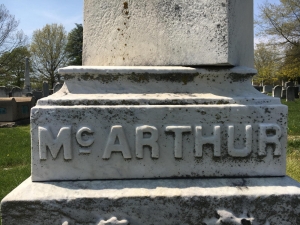 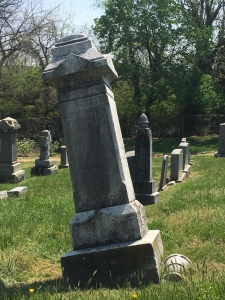 There are lots of reasons behind this. Even though it’s sad, once headstones have fallen they’re relatively safe. Much safer, in fact, than those headstones that are about to fall. We have quite a few headstones and monuments here in the cemetery on the brink of toppling over, which could cause extensive damage to the stone itself. Moreover, these headstones can actually fall on people.

It sounds improbable, but tragically, it’s not uncommon for headstones to fall on children. We even have a recorded instance of it happening right here in Congressional Cemetery in January 1938 (found in our “Injuries” file):

“At a turn in the path, Mrs. McAlerr heard Louise scream. She faced around to see her daughter crushed to the ground under a gravestone as long as her body. Only the child’s feet protruded. Mrs. McAlerr lifted the stone off her and ran to her nearby home with the injured child.” 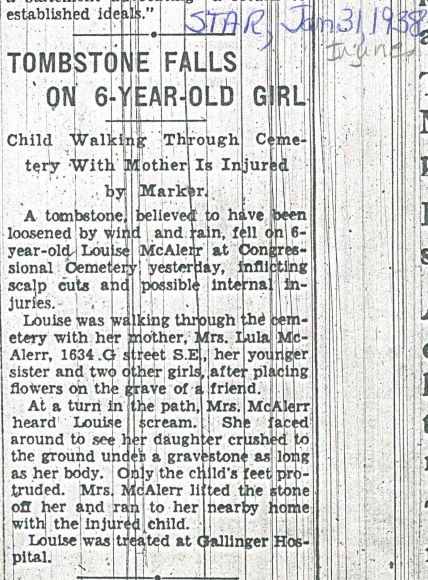 As far as one can tell from the newspaper article, Louise survived her brush with fate at Congressional Cemetery. But at the risk of venturing into depressing territory, other children have not been so lucky. There are many instances of children being crushed to death in historic cemeteries; frankly, the author of this article doesn’t have the heart to cite specific examples, but a quick Google search verifies the tragic truth.

Little Louise appears to have been lucky, but other children have not been, and we’d like to ensure that similar accidents don’t happen at our cemetery. Thus we’ll end with a public service announcement. If you see children playing on vaults or around historic headstones at any cemetery, you’re completely within your rights to warn children and their parents of the potential dangers. It may seem as if you’re overreaching, but many don’t realize how dangerous some of these headstones can be, and it’s important to be vocal about what can happen. We have a sign at our front gate cautioning our visitors against playing on and around the headstones, but it helps to have additional eyes and ears on our grounds and in other historic cemeteries.

In the meantime, we’ll keep chipping away (not literally, of course) on preservation projects here at the cemetery. It is, and likely always will be, a work in progress.