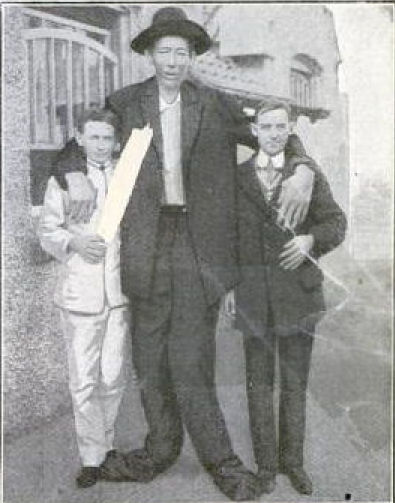 At Congressional Cemetery, we have a giant in our midst. Varying accounts place resident John Turner at different heights: a Washington Post article claims that he was 7 foot 7 inches, while a contemporary surgeon inflated his height considerably to 8 feet 3 inches. Other studies of his bones mark Turner at 7 feet 1 inch. Regardless of the discrepancies in measurements, he was tall. Not the tallest ever by any standard, but tall enough to distinguish him at the time as someone who stood out as unusual and difficult to understand.

Turner was born in 1875 and died at the young age of 36 years old. The rest of his family was “normal sized,” although similarly beset by tragic circumstances. Both of Turner’s parents died young, and his brother perished in an accident at the Navy Yard a few years before John’s death. Sadly, but not unexpectedly, John Turner’s life was defined by his giantism. Few other personal details exist about his short and tragic life other than descriptions of his medical abnormalities.

When puzzling over how to frame this article, the dilemma quickly became evident: what is there to say about John Turner other than that he is tall? He piqued the staff’s interest because of that very aspect, initially brought to our attention by historian Sandy Schmidt, who sent along a 1908 Washington Post article “Washington’s Seven Foot Seven Inch Giant.” There are many seemingly anonymous graves here that are brought to life through the attention of their descendants. Still others are known to us because of their life achievements, their unusual or grisly deaths, or their notable headstones. And in John Turner’s case, the surviving documentation includes a relative wealth of information when compared to many of the other residents buried here. There are multiple newspaper articles, medical descriptions, and obituaries, but all ultimately reach the same conclusion: John Turner was very tall. He lived a very sad life, and was granted no reprieve in death, as his body was dissected against the wishes of his family by Dr. Harvey Cushing. 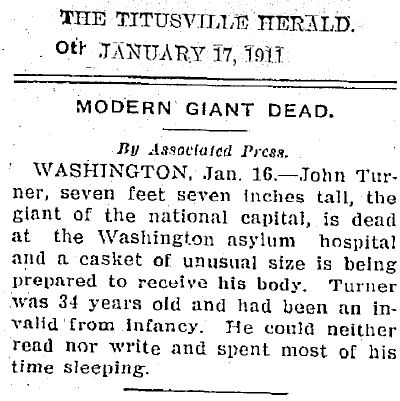 What does stick out, however, is the manner in which the press treated Turner in life and death. If you’ve made a habit of reading old newspaper articles and obituaries (because who hasn’t), you may have noticed that they lack a certain delicacy in descriptions of deaths, crimes, or in Turner’s case, medical afflictions. Writers described murder scenes with an unnerving attention to every salacious detail, which is a boon for the curious but not necessarily for the faint of heart. The Post article describing Turner’s life, however, is simply astounding in its lack of sensitivity.

“He does not live: he merely exists. Such a thing as an emotion is utterly beyond him. During his 31 years of life he has merely vegetated. He cannot read or write, and seems to have no desire to do either. His idea of happiness, if, indeed, he is capable of appreciating what that word means, is to sit and doze calmly in the sun. The hibernating bear is his idea of Paradise.” 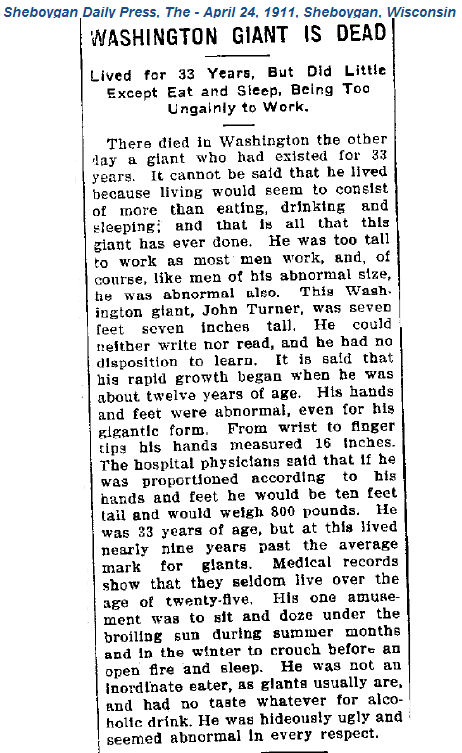 The article goes on to describe Turner’s difficulty finding clothes for his large frame, his overall lethargy, and his numerous medical complications. Overall, the author of the article seems to be at once disgusted and insatiably curious about the existence of John Turner. His inability to wrap his head around the situation can be best summarized with the closing paragraph:

“As it is, he cares nothing for anything; he has no human interest because he is outside the human race, and death to him would not be the shutting out of hopes and ambitions, but simply a going to sleep, a resting quiet and easy, which now is his chief object in life – if, indeed, such an existence can be called a life.”

Turner’s death was treated with similar sentiments. Inevitably, each obituary described his height and other measurements, the size of his coffin (eight feet), and often his languorous existence. The Sheboygan Daily Press, stunningly, ended his obituary with the line: “He was hideously ugly and seemed abnormal in every respect.” John Turner was survived by two sisters, and one would hope that they never read his numerous obituaries.

Lest we judge the press of old too quickly, keep in mind that even in a more politically-correct press era, the oft-repeated “warning, what you are about to see is disturbing and not appropriate for young viewers” is merely a thinly-guised tactic to get you to pay attention. In addition, this article is being written solely because John Turner is a giant, and likely you are reading it for that very reason as well. Congressional Cemetery’s giant was misunderstood, and it’s especially sad that the windows into his life are simultaneously descriptive and obtuse. But, we can note the tragedy of a life and death defined by a malady that cannot be helped, especially in a time when so little was understood about John Turner’s condition.