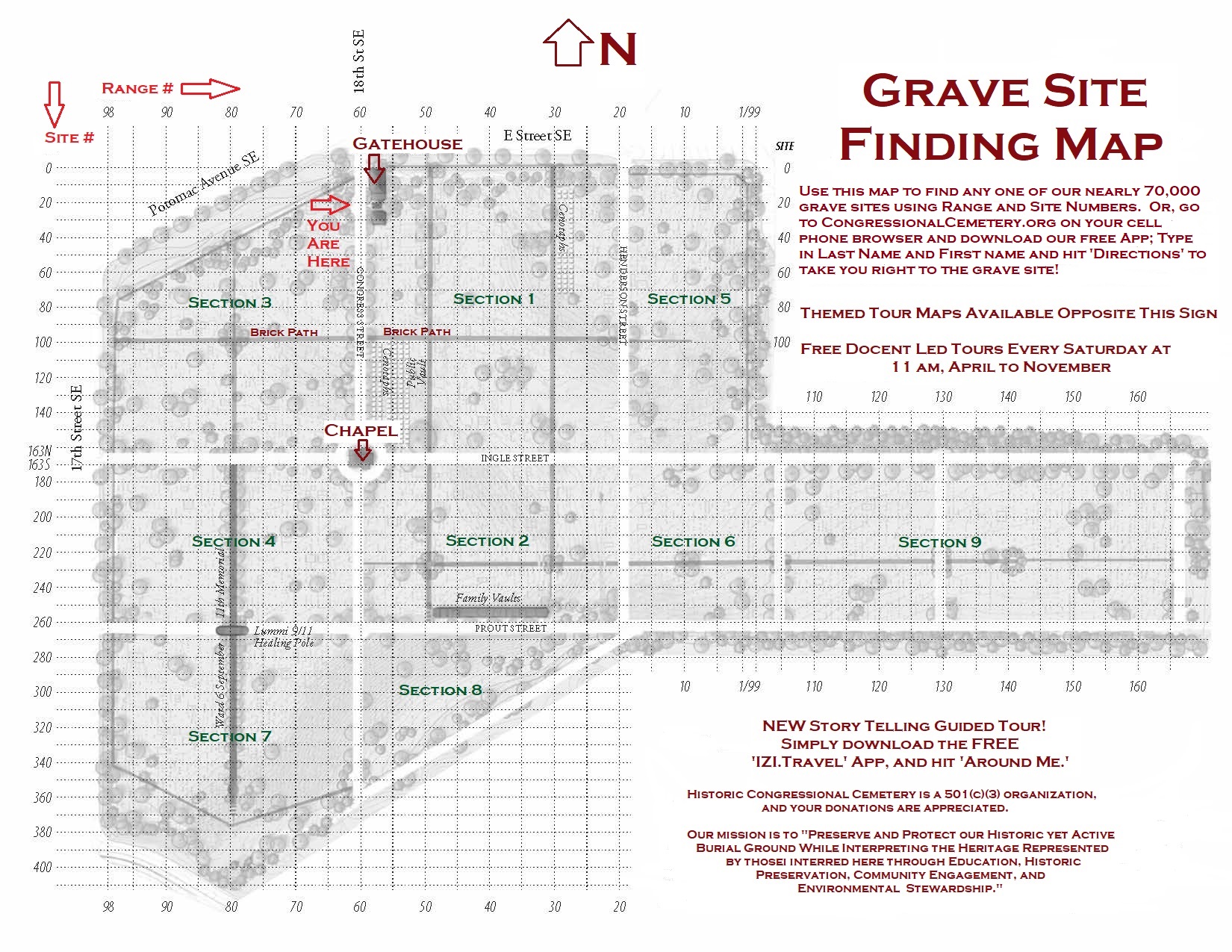 Q. Why is it called Congressional Cemetery?

A. The cemetery had no formal name for its first four years. After it was deeded to Christ Church on Capitol Hill, its name became “Washington Parish Burial Ground.” In 1830, after Congress had purchased several hundred sites, built monuments to Members who died in office and appropriated money for improvements, the public and the members of Congress began referring to it as “Congressional burying ground”. Eventually that was shortened to “Congressional Cemetery.”

Q. Do you have to be a Member of Congress (or any other requirement) to be buried there?

Q. Are you a government cemetery?

A. No. We are a non-profit 501 (c)(3) corporation, The Association for the Preservation of Historic Congressional Cemetery, and have a long-term lease to operate all aspects of the cemetery operations.

Q. Do you still bury people? Are plots still available?

Q. What are those bulky, cube-shaped stones with the little dome on top?

A. They’re called cenotaphs, which means “empty tomb.” Congressional Cemetery is home to 171 cenotaphs, which honor members of Congress who died in office during the first several decades of the Nation’s history. Designed by architect Benjamin Henry Latrobe, who was then working on the new south wing of the Capitol, these identical Aquia Creek sandstone cenotaphs reflected the classical inspiration that was shaping the city plan and its new Capitol building. They were a marked departure from the typical shape and size of early American gravestones, which were generally colonial-type tablets. Historic photos show that the cenotaphs were painted white at some point. Despite Latrobe’s best intentions, public opinion of the cenotaphs tended to be less than favorable even in the earliest years of the burying ground and the use of the cenotaphs discontinued in 1876 when Senator Hoar of Massachusetts argued that this tradition should be abandoned saying that “the thought of being buried beneath one of those atrocities brought new terror to death.”

Q. Is the cemetery open for tours?

A. The Cemetery is always open during daylight hours for self-guided walking tours. Copies of the tours are available at the gatehouse, or can be downloaded here. Free, docent-led tours are held every Saturday from April through October at 11am, beginning at the front gate of the cemetery. We have many other special tours and events throughout the year. Click here for a calendar.

Q. How can I find who is buried there?

A. You can search by last name here. If the name you are searching for is not there, probably the person for whom you search is not at Congressional Cemetery.