This blog series, Tragic Tales at Congressional Cemetery, recollects the tragic deaths of several people buried at Congressional Cemetery. The underlying themes are: murder victims, murder-suicides, murderers, suicides, and peculiar deaths. Please remember that these are real stories that happened to real people. All of these events occurred about 100 years ago, if not more. For most of these people, the family and friends are no longer around or alive. Consequently, these gravesites do not frequently get visitors. I encourage you to remember these people, remember their stories, and visit their graves next time you are at the cemetery. Leave flowers or a meaningful trinket at their grave sites to show that you were thinking of them. Or, consider adopting their plot as part of our Adopt-a-Plot program. Download our App, Historic Congressional Cemetery, on your smartphone and use the “Search” feature to find where these sites are located on a map of the cemetery. 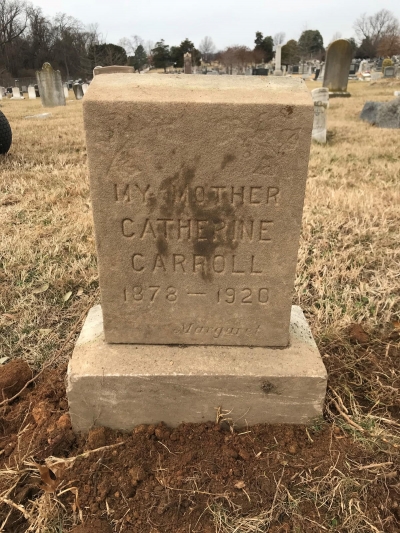 On December 14, 1920, William Joseph Carroll, 44, told his wife, Catherine Carroll, 41, that if she wasn’t home from work at the Washington Terminal Company by 5:00 p.m. that day he was going to kill her, likely because he suspected that she was being unfaithful to him. Unfortunately, Catherine did not arrive home by 5:00 p.m. because she didn’t go directly home from work. Around 7:45 p.m., William choked his wife, and she ran from their house at 1313 K Street to seek safety at a neighbor’s house. William then shot his wife in their yard. Three bullets entered Catherine’s breast, and she died instantly. Afterwards, William attempted to take his own life, but the pistol, which he purchased the day of the murder, misfired. When police arrived on the scene, they found William lying by his deceased wife with his arms extended towards her. He admitted his guilt to the police, allegedly telling police officers “She is my wife. I killed her; she did me wrong.” Their fourteen year old son, Martin, and their five-year old daughter, Margaret, were at home at the time of the murder.

Lee On, a Chinese laundryman, was ironing a man’s shirt on the night of February 13, 1912. At 10:20 p.m., Lee On, was found by a policeman pounding a partition wall, crying for help, and with blood streaming down his face and into his eyes. At midnight, On died at the hospital before he was able to tell anyone what happened. On’s murder was initially a mystery because On had no known personal or political enemies.

An investigation of the crime scene, which was located on 14th Street, revealed that there were bloody fingerprints belonging to On at the crime scene. There were also two fingerprints likely left by the murderer in the snow. The washroom, bedroom, shop, and storeroom were in “shambles,” and blood was found everywhere, including on the floors, walls, furniture, and linens. Investigators discovered that On was struck at the place where he was ironing because there was a “great pool of blood on the floor in front of the ironing board [which showed] where On dropped in his tracks.” His body was then dragged out of sight from anyone passing by the shop on the street. The murderer had locked the front door, and hid the key under the bench in the front room so that nobody could enter the shop. After the crime, the murderer fled the scene out the back door, which led to a cluttered, narrow alley.

There was nothing at the scene that signified that the victim struggled, indicating that the first blow knocked On out and left him unconscious. On’s clothing had been searched. The cash drawer had also been rifled through, leaving officials to strongly suspect that robbery was the motive of the murder. A close friend of On claimed that On only made $5 or $6 a week, and a neighbor claimed that On frequently carried around a large roll of bills in his clothing.

An autopsy showed that On’s forehead was fractured by a blow. On also received a blow that fractured three ribs (and left one rib broken in many places) on his right side.

Johnson’s confession revealed that Norris had dropped off a gray sweater in the laundry right before On was murdered. Norris asked On how much it would cost to have the sweater washed, and On told him ten cents. Then, Norris struck On on the head with a billiard cue as On reached for the sweater, knocking On to the floor. After locking the front door, Norris dragged On to the rear room and robbed him before hitting him several times while On was on the floor. Norris admitted to stealing about $5 from the cash drawer, and claimed that he burned the billiard cue after fleeing the scene. 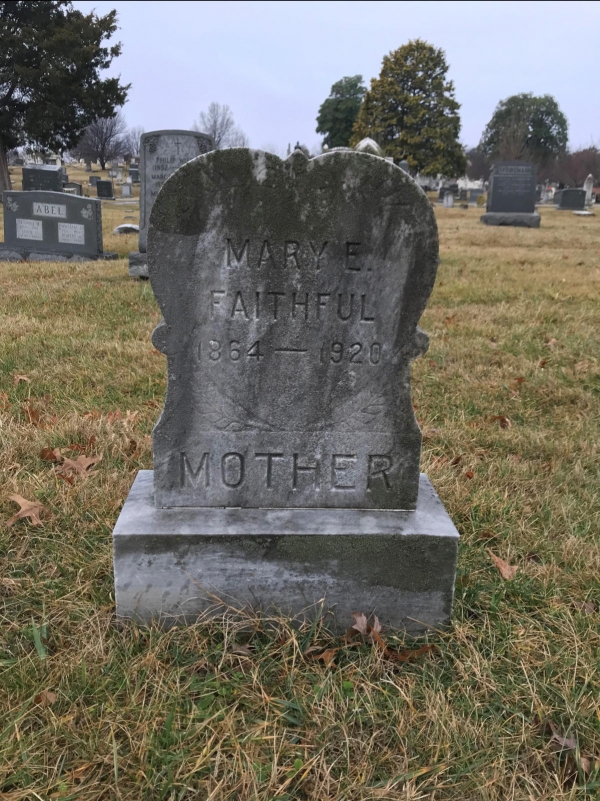 On February 7, 1920, Edgar Randolph Perrygo, a 17 year-old newsboy, went to Washington D.C. to get a marriage license to wed Miss Mabel Hill, 17. Perrygo claimed that he became sick on the street before he reached the clerk’s office. A stranger then gave him a drink to help him feel better. Instead of continuing his journey to the clerk’s office, Perrygo decided to go to Congress Heights, picking up an 18” iron bar from the road along the way. Emily Faithful, 63, whom Perrygo knew, lived nearby, and Perrygo decided to pay her a visit. Before reaching Faithful’s front door, Perrygo slipped the iron bar up his sleeve and in the pocket of his raincoat. After welcoming Perrygo into her home, Faithful introduced him to William Collins, who lived with his wife in a room on the upper floor. Then, Collins returned upstairs to his room. Minutes later, both Collins and his wife heard Faithful moaning loudly. Collins went back downstairs to investigate, and ended up dodging a bullet aimed at him. Running full speed upstairs, Collins retrieved a pistol and started running after Perrygo. However, Perrygo managed to escape. Faithful was taken to the hospital and treated for a fractured skull. Unfortunately, the physicians correctly predicted that Faithful would not recover from her injuries. A pocket in Mrs. Faithful’s belt was slashed and the contents were missing. Detectives ultimately recovered $50, which Perrygo admitted to taking. Nurses at the hospital also discovered $2,470 sewed into Faithful’s skirt.

Mrs. Faithful, who was notorious for carrying several thousand dollars on her at all times, was beaten on the head with the iron bar because Edgar Perrygo wanted the funds to wed Hill. Initially, Perrygo told police officers that he hit her because he was suffering from “the effects of a drink given [to] him by an unidentified man on the street.” Later, Perrygo changed his statement, admitting that he wanted to wed Hill and didn’t have the money to do so. When told of her death, Perrygo sobbed, revealing that he “kind of expected it.” Meanwhile, Mabel Hill was not affected by the news of Faithful’s death.