This week, four stories will be shared, all of which focus on people who, sadly, committed suicide. There were a wide range of known reasons why these people each committed suicide, including mental illness, heartbreak, work, and illness.

We now have far more resources available for people struggling with suicidal thoughts and mental illness. If you or someone you know is suicidal or in emotional distress, contact the National Suicide Prevention Lifeline at 1‑800‑273‑TALK (8255). Trained crisis workers are available to talk 24 hours a day, 7 days a week. Your confidential and toll-free call goes to the nearest crisis center in the Lifeline national network. These centers provide crisis counseling and mental health referrals. You can also call 1‑877‑SAMHSA7 (1‑877‑726‑4727) to get general information on mental health and locate treatment services in your area.

On September 14 or 15, 1912, at the young age of 18, Anna Angell committed suicide by shooting herself right below the heart with a pistol that she borrowed from an unnamed young man. The pistol that she used was so close to the gown Angell was wearing that it caught on fire and was still on fire when police arrived on the scene. Angell died about an hour after later. Before she committed suicide, she wrote a note addressed to John Kashouty, a Syrian, which shed some light on why Angell may have killed herself. The note, which was round on a dresser in Angel’s room, said: “Dear John, Consider what I have done a mistake if you want to, but forgive me and remember it was all your fault. I loved you better than anyone else, even better than my life. You know, dear, if you had married me when you promised to this would not have happened. It is too late now. John, remember that I loved you better than any other girl ever will.” Angell had told her friends that she was engaged.

Angell worked in a fruit store on G St in NW DC and had recently moved closer to her work. On the day she committed suicide, Angell had asked her employer if she could leave early from work and ended up leaving around 3:30 p.m. She went up to her room and wrote the letter and changed into the gown before shooting herself a few minutes before 4:00 p.m. There were other boarders in the building at 728 10th St NW at the time of Angell’s death. 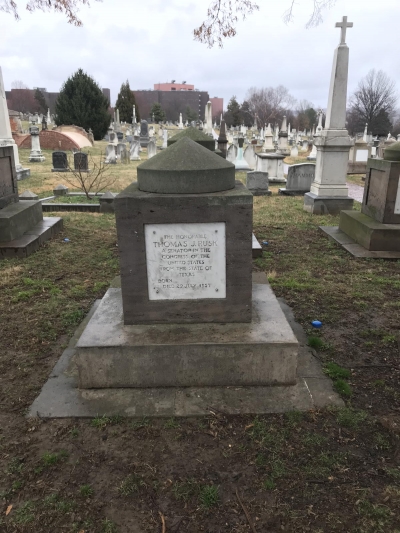 Thomas Rusk, a Texas Senator, committed suicide by shooting himself in the forehead on July 29, 1857. Senator Rusk had suffered from depression after the death of his wife. He was also recovering from a severe illness and had a “rising on the back of his neck.” Rusk’s body was found on the ground behind the gallery at the back of the house, and there was a rifle underneath his body. Rusk was buried with Masonic honors. 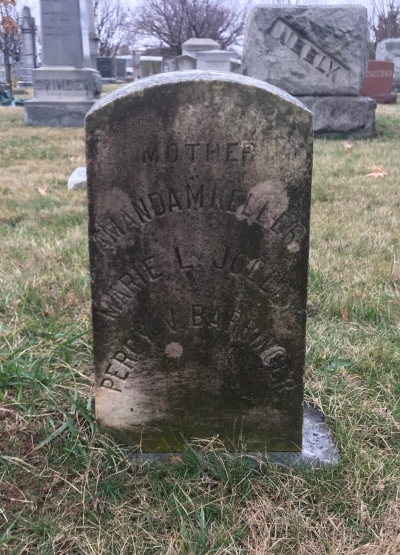 Marie Jolley was employed in the gathering room at the government printing office. Some of Jolley’s friends speculated that she feared losing her job because the force was being reduced. Jolley had also been separated from her husband, B.B. Jolley a doctor who had moved to Fauquier County after their separation. According to some of her friends, Marie Jolley was having a hard time handling the separation. Regardless, Florence Jolley, Marie Jolley’s high school-aged daughter, noticed something off about her mother on the night of May 14, 1907. Consequently, Florence Jolley decided to take her mother on a walk. The mother and daughter had an “affectionate good night” before going to bed that night. Around 7:30 a.m. on May 15, 1907, Florence Jolley went to wake her mother up so that she would make it to work on time when she discovered her mother’s lifeless body. When Marie Jolley was found, there was the end of a gas tube in her mouth, which was hooked up to the stove. Florence Jolley screamed, and other people in the house at the time ran to Florence Jolley’s side. It was determined that Marie Jolley had been dead for several hours before her body was found. Marie Jolley left no note, so the reason why she committed suicide was unclear.

Thomas Ware, 23, moved to Anacostia in circa 1892. Ware was a driver in one of the Anacostia cars before he became a horse dealer. Two years later, he met and almost instantly fell in love with Cora Lane, 18, who was described as a “pretty brunette, petite in figure, and with large, expressive dark eyes, jet black eyebrows, and curly black hair.” Lane and Ware’s worlds collided as Ware was friends with Lane’s uncle. Lane lived with another one of her uncles, Isaac Lane, who didn’t allow his niece to have company. Therefore, Ware and Lee secretly wrote letters to each other, and a young African-American boy, a “protégé” of Ware’s, delivered the letters. Ware and Lee signed and addressed the letters using numbers: Lane used No. 25 and Ware used No. 18. The couple had written over 200 letters to each other. However, the letters were burned. Lane’s aunt and uncle eventually discovered the letters and the relationship, and strictly refused Lane to continue to communicate with Ware. Consequently, Ware proposed to Lane. Lane then spoke to her father, an assistant pastor of a Methodist church in Baltimore, who decided that Ware and Lane could wed if Ware left the Catholic Church, which he was raised in, and became a Methodist. Essentially, Lane’s father could not and would not consent to her marriage to a Catholic, and Lane refused to disobey her father. Ware said that his Catholic ideas couldn’t be changed. Nevertheless, Ware still continued to pursue Lane to the extent that he threatened to commit suicide multiple times because Lane refused to marry Ware. Lane persuaded Ware multiple times not to commit suicide. On another occasion, Lane’s aunt convinced Ware not to commit suicide because she reminded him of his family and his family members would feel. On March 26, 1895, Ware visited Lane. He left her house around 4 p.m., likely after another rejected marriage proposal, and went to an office at C. Dodge’s livery stable on Harrison St. Once at the office, Ware wrote a note, which he then thrust in an unlit stove. The note said “Mr. Dodge: I have given George my key to my trunk and he will give it to you, and I don’t want you to give it to no one but my mother, and tell her that my letters in m trunk…let no one see them.” Herbert Martin and Ed Ferguson were also in the office at the time. Ware pointed a .32 caliber pistol with six chambers at his head, and told Martin and Ferguson that he was about to shoot. Martin told him not to shoot, and Ware hesitated. Sadly, Ware changed his mind and put the pistol to his side. Ware then fell forward on his face, and his clothing caught on fire from the blaze of the pistol. After six or seven gasps for air, Ware died. Friends of Ware’s revealed that about a week before Ware’s death, a valuable horse of his died, and an even more valuable horse went lame. Ware had also recently attempted suicide on two separate occasions. The first attempt was two Sundays before his death. The owner of the boarding house Ware lived at took the pistol from him. The second attempt occurred on the Sunday before his death, but, again, the owner of the boarding house he lived at took the pistol from him. Lane claimed that Ware once threatened to kill her if she didn’t marry him.