As you walk through the cemetery, you may have come across a grave “stone” that is bluish-grey in color. These stones are called white bronze monuments, but they are actually made out of zinc. 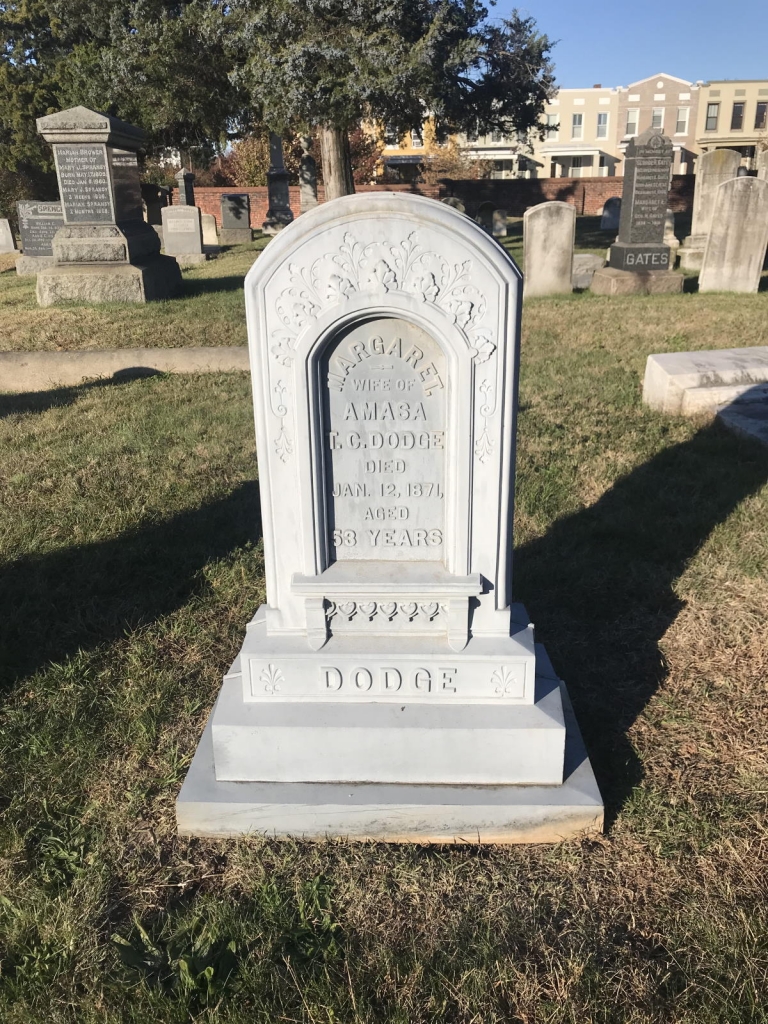 This example of a “white bronze” monument is located in Congressional Cemetery, near 17th street.

The Monumental Bronze Company from Bridgeport, Connecticut manufactured most (if not all) of these monuments. Beginning in the 1880s, the company expanded and had locations in Detroit, Chicago, Ontario, Des Moines, and Philadelphia. However, most, if not all of the monuments, were manufactured in Bridgeport, Connecticut. The company expanded rapidly after the Civil War (in circa 1874) and closed down during the Great Depression (circa 1829). Sales of white bronze monuments peaked in circa 1888. The plant that produced these monuments was taken over during World War I so for the manufacturing of gun mounts and ammunition. Additionally, fashions changed during the war, and demand for white bronze monuments declined, leading to the downfall of the Monumental Bronze Company. Even though the Monumental Bronze Company formally closed down, the company still continued to cast tablets and plaques that allowed family members’ names to be added to the monuments after their deaths.

“Monumental Bronze Co. Bridgeport, C.T.” is engraved on many of the “white bronze” monuments. This particular example is found on a monument located in Congressional Cemetery near the “dog spa.”

These monuments are made of 99% pure zinc, and they develop zinc carbonate when the monuments are exposed to air. This creates the bluish-grey color and serves as a protective coating. These monuments are hollow and they have been sandblasted. The monuments were cast from a wax model along with busts and bas reliefs from portraits and photographs. A plaster cast was then made from the wax model. The plaster cast was used to make a plaster duplicate of the wax model. The second plaster cast was utilized to make the sand castings that became the monument. This plaster cast was cut into pieces, and the monument was cast in pieces, which gave the monument sharp details. The pieces were fused together by clamping the pieces together and pouring zinc into the joints. Heat melted the surface of the cast pieces, fusing them together and making them inseparable. Later white bronze monuments were sand blasted to make the surface resemble stone and to lighten the color. The bottom section of a white bronze monument has four inner tabs with holes in them so that pegs could be put in the holes to attach the monument to a cement or granite foundation. Customers likely made their own foundations. 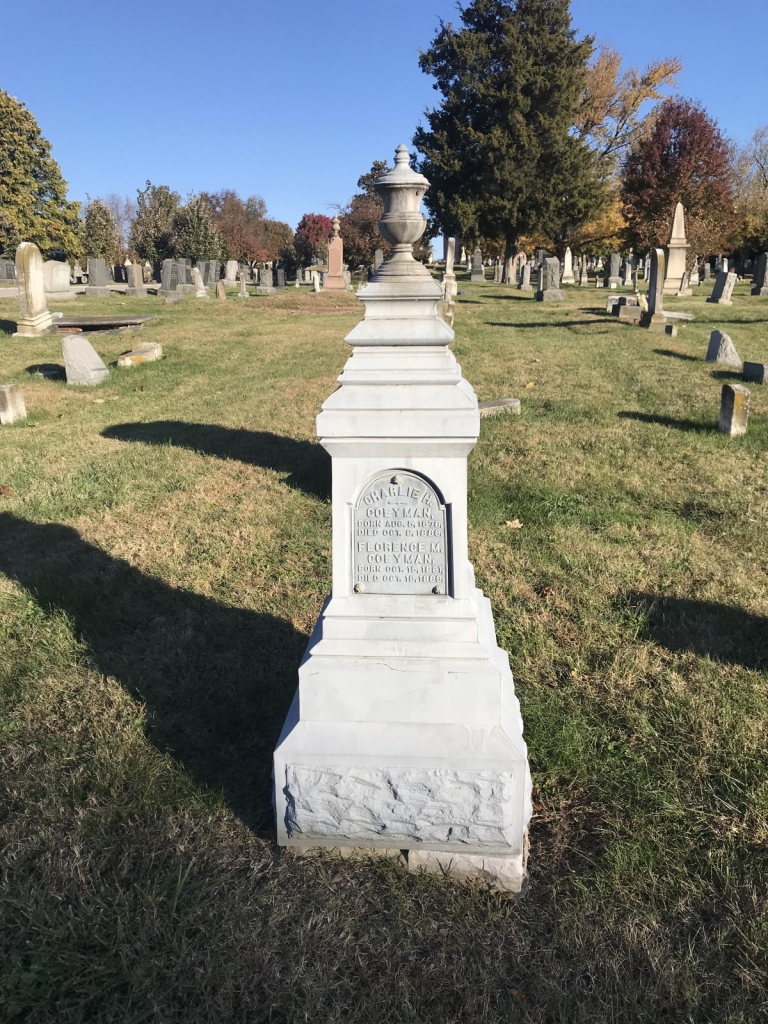 This monument has plaques on it that could easily be added to the monument when the person passed away. This monument is located in Congressional Cemetery, near the “dog spa.”

Although many of these monuments are around a hundred years old, most are in much better shape than granite and marble stones. This is partially due to the durability of zinc. The biggest threat to white bronze monuments is creeping. This occurs when the weight of the zinc at the top of the monument puts pressure on the lower section, causing the monument to slowly move over time. This can cause a crooked base line on a monument or cause tiny cracks. The best way to address this solution is to install an inner armature to help the base of the monument support the weight of the top of the monument. Additionally, sometimes the weak or brittle parts of the zinc break or separate from the seam. This can be fixed by soldering the pieces together or using an epoxy or resin.

This post was written by Kymberly Mattern, Grounds Conservation Manager.

This information came from: