Previous Next
Maibockfest at Congressional Cemetery

Did you miss out on getting tickets to Savor? Never fear: Historic Congressional Cemetery is throwing a Maibockfest on Saturday, May 10 from 3:00 – 6:00pm – and you’re invited. 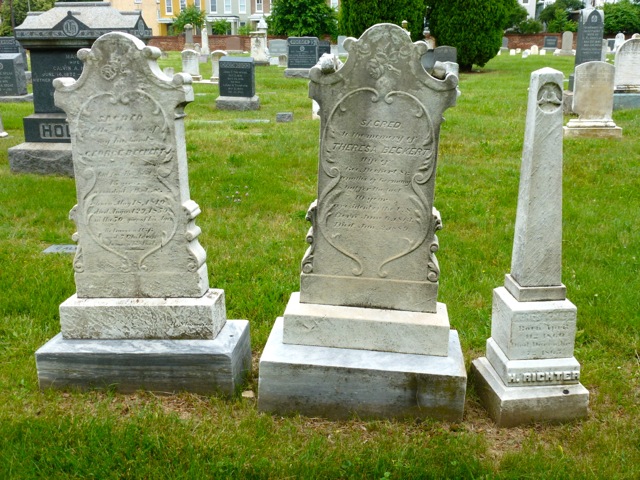 George Beckert (far left) may have been the first to brew lager in DC. He and his wife Theresa (middle) are buried in Congressional Cemetery. Their brewer son-in-law, Hermann Richter, is the adjacent white obelisk. Photo credit: Garrett Peck

This will be the funnest beer festival you’ve ever attended in a cemetery. Congressional Cemetery is fun, quirky place full of interesting people in what is a Victorian park in the Hill East neighborhood. It isn’t solemn like Arlington National Cemetery, but a place that turns its Public Vault into a cocktail lounge for public events. Last summer the cemetery employed a herd of goats to clean out a section of land along the Anacostia River, rather than using herbicides.

And thus we come to our theme: the Maibockfest, or May Bock Festival. Bock is a hearty lager, traditionally the beer of Lent, and it also means billy goat in German. Thus Bock beer uses a goat as its symbol. Three local breweries will be opening their taps to supply us with Bock beer:

We’ll also be doing the “ribbon cutting” for the Brewers Tour. There are nineteen people related to DC’s historic brewing industry who are buried at Congressional Cemetery, and they’ve been mapped out in a self-guided tour brochure. Maibockfest attendees will be the first to take the tour. On the day of the festival, red Solo Cups will be displayed at each of the brewer’s graves.

There’ll be copies of Capital Beer: A Heady History of Brewing in Washington, D.C. on hand for purchase and signing.

Registration for the event is $25, and participants can buy tickets on the Congressional Cemetery website. In order to partake in the featured libations, ticket holders must be 21 or older. ID is required.

Bock beers are higher in alcohol than regular lager. Please consider public transit options or having a designated driver (car, cab, Uber). The Potomac Avenue and Stadium Armory Metro stations are only a few blocks away. Congressional Cemetery is located at 1801 E Street, SE in Washington, D.C.

Garrett Peck is the author of Capital Beer: A Heady History of Brewing in Washington, D.C.