You’re Hosting What in the Cemetery?

Previous Next
You’re Hosting What in the Cemetery?

Why does a cemetery need or choose to have events?

Cemeteries should be serene, peaceful spaces reserved for contemplation and mourning.

As a historic yet active cemetery, we sometimes receive the above remarks and questions, along with similar commentary, in response to the events we hold at Congressional Cemetery. Of course, everyone is entitled to their own opinions and beliefs, and some believe that cemeteries should be reserved for one purpose only: burying the dead. The caretakers of Congressional Cemetery thoroughly understand and respect these opinions; however, there is a rhyme and reason behind hosting events in a historic cemetery. For those who want to know more about the why and how, we’ve outlined a few explanations for holding events in a cemetery.

For those with a more limited attention span (or interest level), here’s the short version:

Congressional Cemetery is first and foremost the resting place for over 65,000 individuals, and it continues to operate as an active burying ground. The Association for the Preservation of Historic Congressional Cemetery, the non-profit that runs the cemetery, relies heavily on private donations, the K9 Corps, as well as income from events to supplement income from selling burial sites and holding funerals. Without these contributions, the cemetery would not be in the condition that it is in today, and the non-profit would not be able to continue to preserve and interpret this National Historic Landmark. The cemetery also operates under the historic precedent of the Victorian era, when it was common for cemeteries to function as public spaces where families gathered to picnic, visit, and wander the grounds, much in the way that visitors use the National Mall in present day.

For everyone else, here’s the long version. With pictures!

30th May 1899: Several people stroll up a path at the Green-Wood Cemetery. (Photo by Museum of the City of New York/Byron Collection/Getty Images)

Public interest in cemetery visitation reached new levels in the mid-nineteenth century.  As Cathleen Breitkreutz notes in her developmental history of Congressional Cemetery, this increased attention can largely be attributed to the rural cemetery movement in America. The movement transformed cemeteries into destinations for those wishing to escape the city and enjoy nature and monuments in a cemetery setting.  Cemeteries such as Mount Auburn outside of Boston and Laurel Hill Cemetery in Philadelphia were specifically designed with this purpose in mind.  Although Congressional was formed well before the movement began, it still benefitted from the new perceptions of cemeteries that evolved during this period.  Instead of being viewed solely as final resting places, cemeteries such as Congressional earned mention in tourist guidebooks and became gathering places for weekend outings.

Although decidedly less common today, popular cemeteries in the nineteenth century often issued tickets to owners of lots for entrance to the cemetery grounds.  In 1872, the vestry issued over one thousand tickets, which demonstrates just how popular Congressional was.  Before the National Mall and other open spaces that we take for granted in modern-day DC, cemeteries not only served as places to mourn, but as places to gather, reflect, and relax.  These tickets are tangible proof that Congressional Cemetery has been viewed as a public space for well over a century, a tradition that continues to this day. 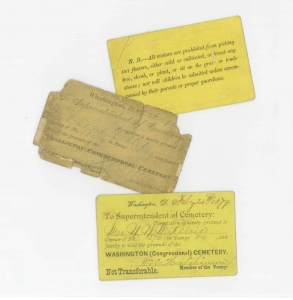 Tickets from the Congressional Cemetery archives.

We often get visitors to Congressional who remember when the cemetery was overgrown, unsafe, and overall an unpleasant place to visit. As Breitkreutz noted in her history of the cemetery, “when J. Edgar Hoover was interred on 4 May 1972 visitors were dismayed at the condition of the site. Senator Vance Hartke of Indiana described the cemetery as a ‘national disgrace.’” Vandalism was rampant, dense weeds and grass choked the headstones, and the non-profit lacked the funds and support to adequately provide for the care of the grounds. In 1997, Congressional Cemetery was placed on the National Trust’s 11 Most Endangered Historic Places list. The Trust stated when publishing the list that “like most early cemeteries…Congressional was established without a perpetual care plan and as plot-owning families move or die out, the site is suffering from increasing neglect, vandalism and theft.”

The attention that Congressional Cemetery received in the late 1990s, along with two endowments from Congress and the National Trust, signified a decided turning point in the state of our non-profit. Thanks to the increased awareness of the historical and cultural importance of Congressional Cemetery, APHCC was revitalized and the cemetery was eventually designated as a National Historic Landmark. 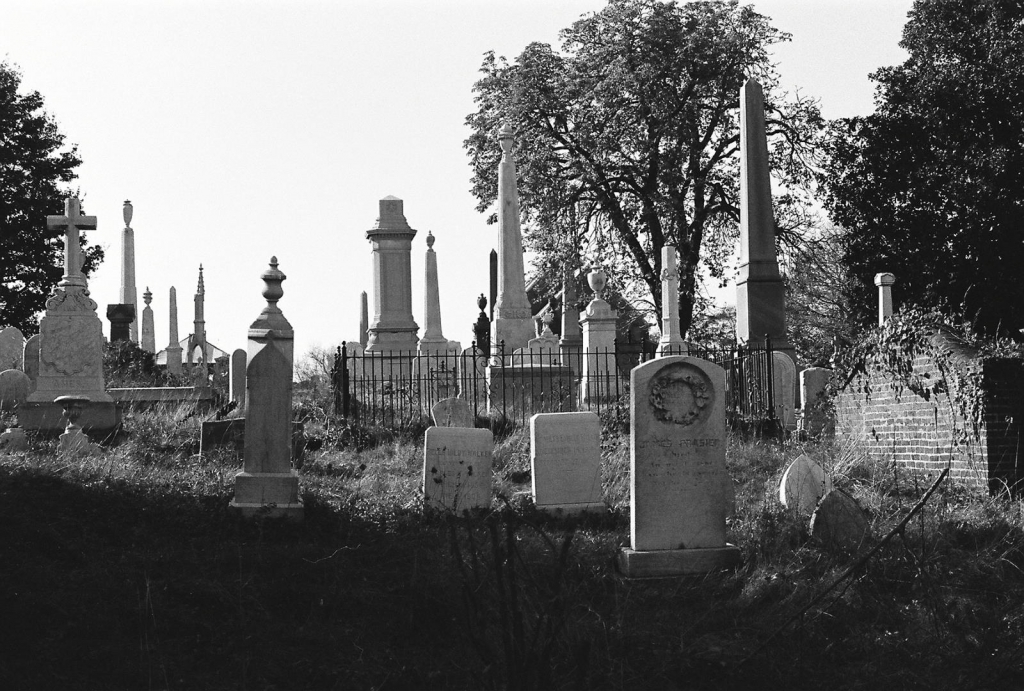 Picture of Congressional Cemetery in the 1970s.

The Plight of Historic Cemeteries

But as with all non-profits, there is never time to rest on laurels. Historic cemeteries in particular need to be creative with fundraising ideas and revenue streams because, let’s face it: they all fill up eventually. Historic cemeteries can’t rely on funds from burials and plot sales in the same way that commercial cemeteries do, at least in the long term. Congressional Cemetery is unique in that we still have plenty of plots left (we estimate around 1,000 spots), but we would be remiss if we didn’t look into the future. How do you ensure that people will continue to care about a historic cemetery?

We’ve come up with a lot of different ways to encourage community involvement and fundraising, but one of the most visible and effective ways to do this is through events. Congressional Cemetery is part of a community of historic cemeteries who utilize creative events to fundraise for the cemetery, including most notably Oakland Cemetery in Atlanta, Laurel Hill in Philadelphia, Green-Wood in Brooklyn, and Mount Auburn in Massachusetts, among many, many others. These cemeteries host 5k runs, twilight tours, murder mystery dinners and music festivals: all models that we look up to and reference when we create our own calendar of events.

In addition, all the funds that we raise with 5k runs, movie nights, Day of the Dog and other special events go right back into the upkeep of Congressional Cemetery. You can see the changes that a little TLC (and a lot of money) makes: 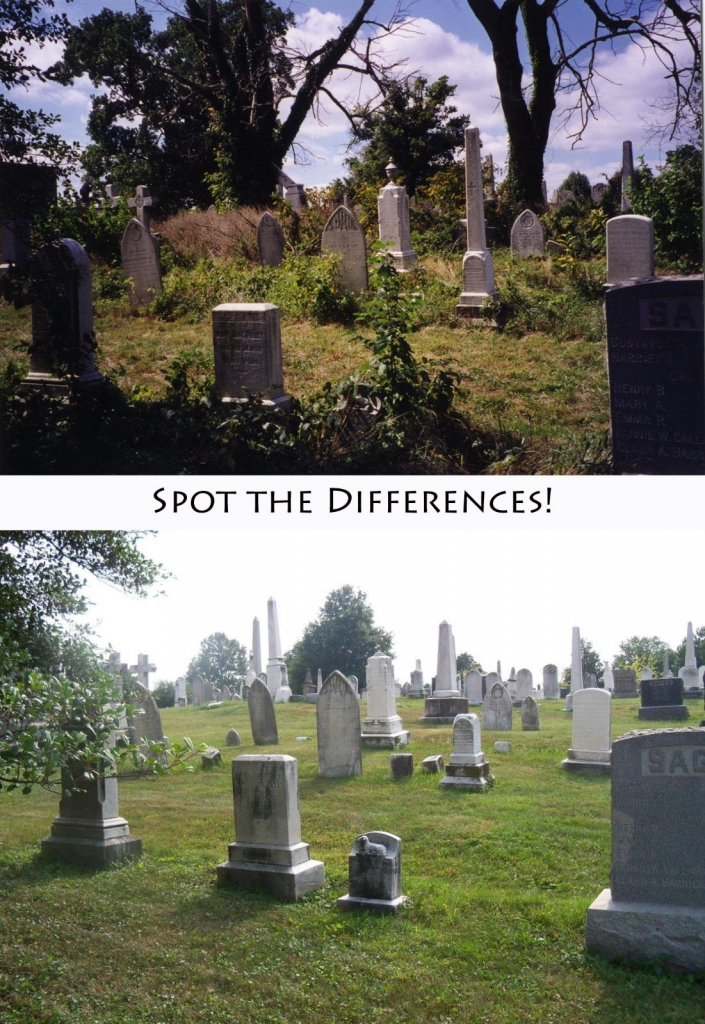 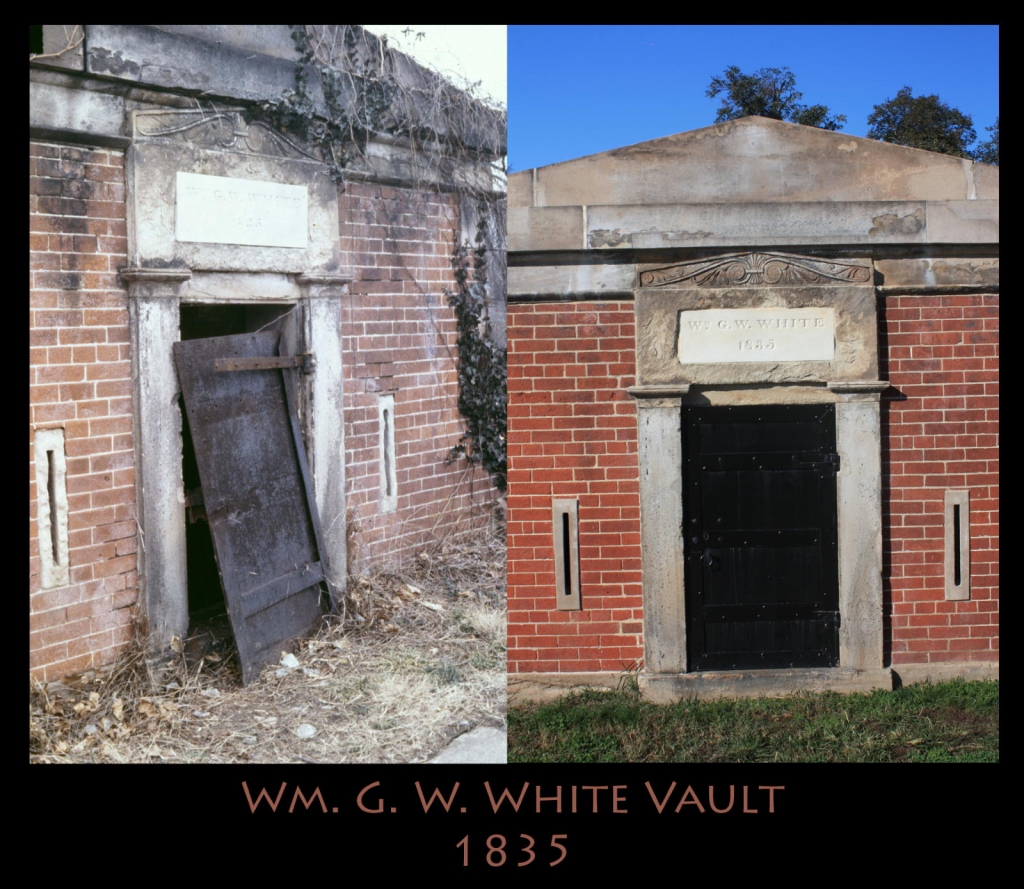 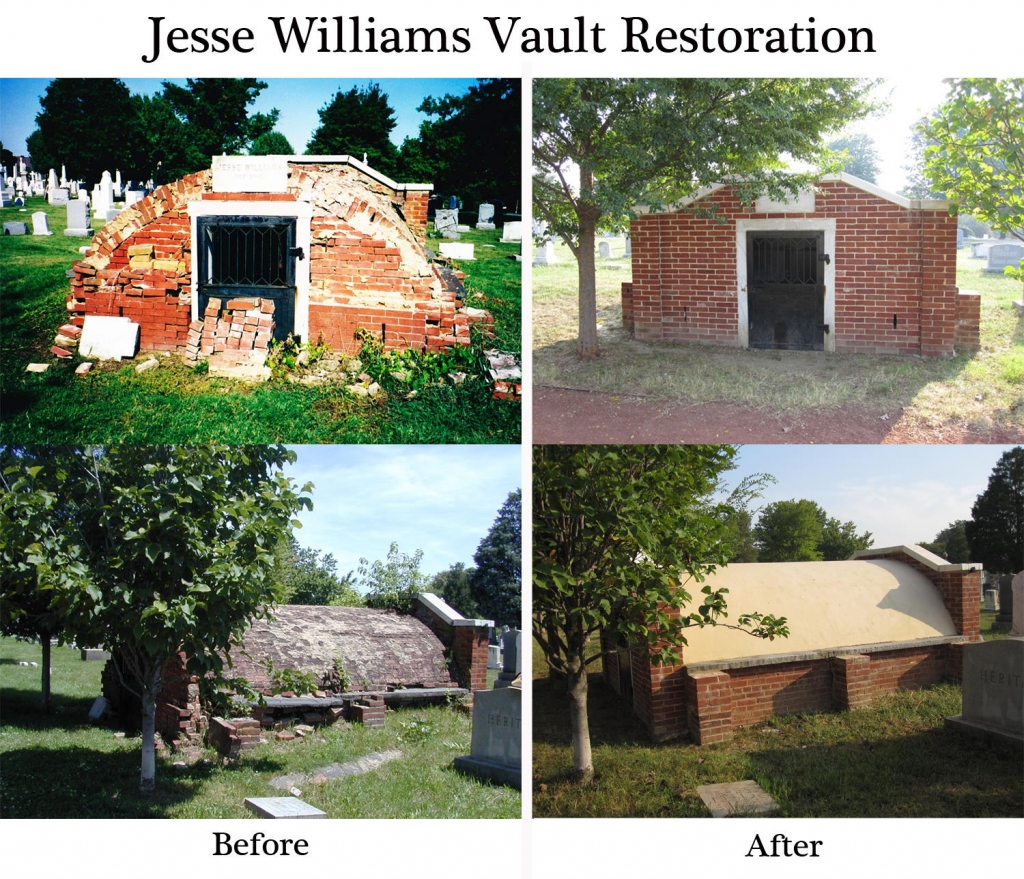 We endeavor to host events that are true to our mission and to the inherent goal behind every event: to bring a new group of people to Congressional Cemetery who will grow to love and treasure it the way that so many of us already do. Events help ensure that Congressional Cemetery remains relevant, and it’s not just about the money, although that certainly doesn’t hurt. It’s about building meaningful connections to the community and helping the public understand why this cemetery truly is a national treasure.