The Dead Tell the Best Stories: An App Review

Previous Next
The Dead Tell the Best Stories: An App Review

Do you love interesting stories about our Cemetery’s “residents?” Of course you do! You’re following the Congressional Cemetery blog. You’re in great company, because so does Liz Ruskin, a woman who works in public radio, brings her dog Lola to the Cemetery, and has put together a truly engaging audio tour. This exclusive tour, aptly named “The Dead Tell the Best Stories,” is available on the app izi.travel, which you can find on any smartphone app store for free. Liz created this tour with inspiration from her love of stories; she loves the audio tours at museums (when they’re actually good, she added), and thought that the Cemetery deserved one of its own. This tour takes you on a trip through a pretty significant swath of the cemetery, from the front gates all the way to the Gay Corner, and there’s still more ground to cover in the future. Liz hopes to keep adding to it so that one day visitors can simply walk around the entire cemetery and stumble into a story zone wherever they are!

The tour is skillfully narrated and never for one moment dry. Liz isn’t the only narrator in the tour; she brings in a multitude of her knowledgeable friends to share their expertise and their own wealth of stories. These guests include our own Board member Rebecca Roberts, who shares the Victorian history of the “cemetery as park” concept and how we strive to implement that in our programming. Professional tour guide Robert Pohl also contributes his take on the infamous huckster R.S. Hickman, who is supposedly the reason why you need a license to be a tour guide in DC! You might not expect it from a Cemetery audio tour, but “The Dead Tell the Best Stories” is oftentimes rather chuckle-worthy. For example, Pohl humorously explains the mechanics of grave-robbing in relation to R.S. Hickman’s case, and there’s a hilariously off-kilter impersonation of Dr. William Thornton. 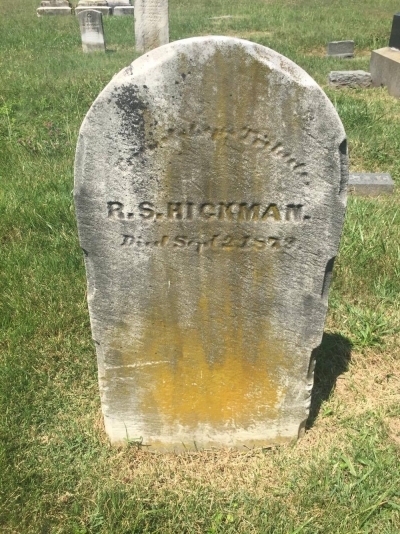 The man, the myth, the moocher – R.S. “Beau” Hickman, fascinatingly profiled in the tour.

That very impersonation inspired me to mention just how deft this tour is in its multi-media use: the tour isn’t just narrated, but also includes a variety of audio media that transport you right into the moment in history you’re listening to. The Thornton section of the tour, for example, makes extensive use of a recording from the Cemetery’s own 2015 Soul Strolls, in which the interpreter invites you to imagine you’re actually listening to the kooky doctor (and George Washington fanboy)’s plan to reanimate Washington’s body! Moreover, the tour is filled with newspaper clips read-aloud, which allow you to be the Washington Post reader the day after the Arsenal fire or gain insight into the lives of some of the lesser-known personalities in the tour. Interviews and letters also contribute to the interactive nature of the tour. The final piece of audio media I’ve yet to mention is music, which plays a major role in setting the ambience for the stories. From the plucky guitars evoking antebellum scenery that play in the Matthew Brady section to the lively Sousa marches for their namesake and the spooky minor-key music toward the beginning, the music has been expertly curated to further immerse you in the scene. 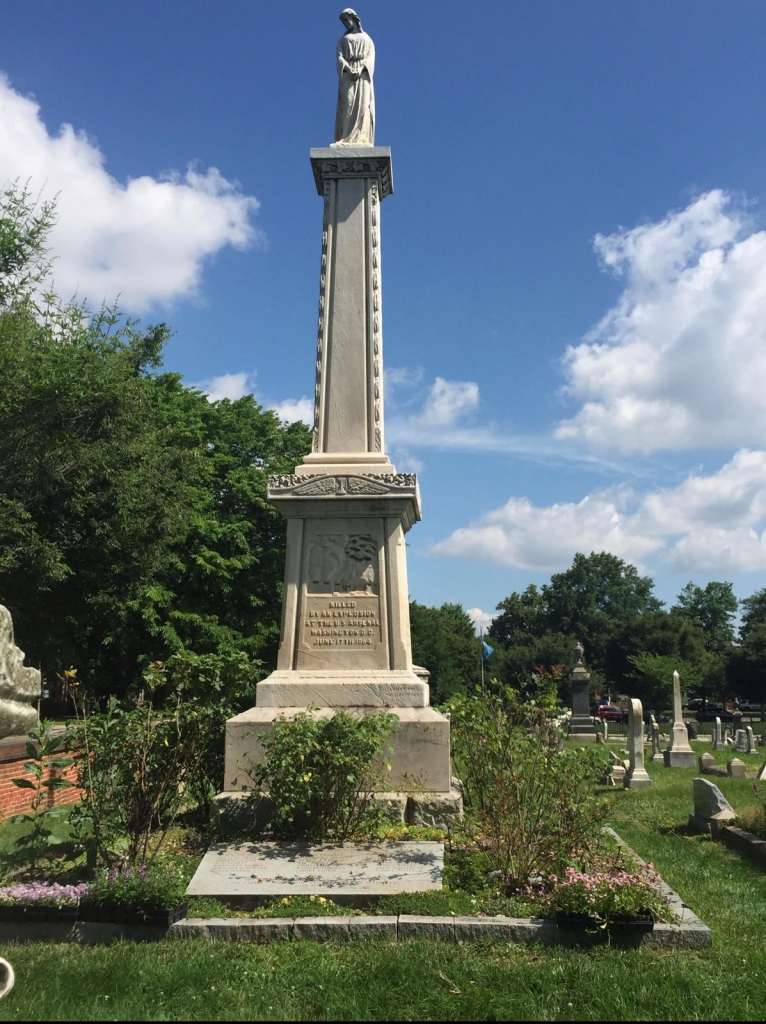 The Arsenal Fire Monument, accompanied by contemporaneous media reports in the tour.

The tour does an excellent job of engaging you not just in the history, though, but also in the often-tumultuous emotions of the very human people buried in the Cemetery. Take, for example, the section on Leonard Matlovich, the famous gay activist and Air Force member who came out publicly at a time when that action would earn him a dishonorable discharge. This segment largely lets him speak for himself, and to great effect – you can hear the pain in his voice when he describes in an interview how it felt to hear other people talking negatively about LGBT people while he was closeted, and when he announces his struggle with AIDS that would claim him at a young age. 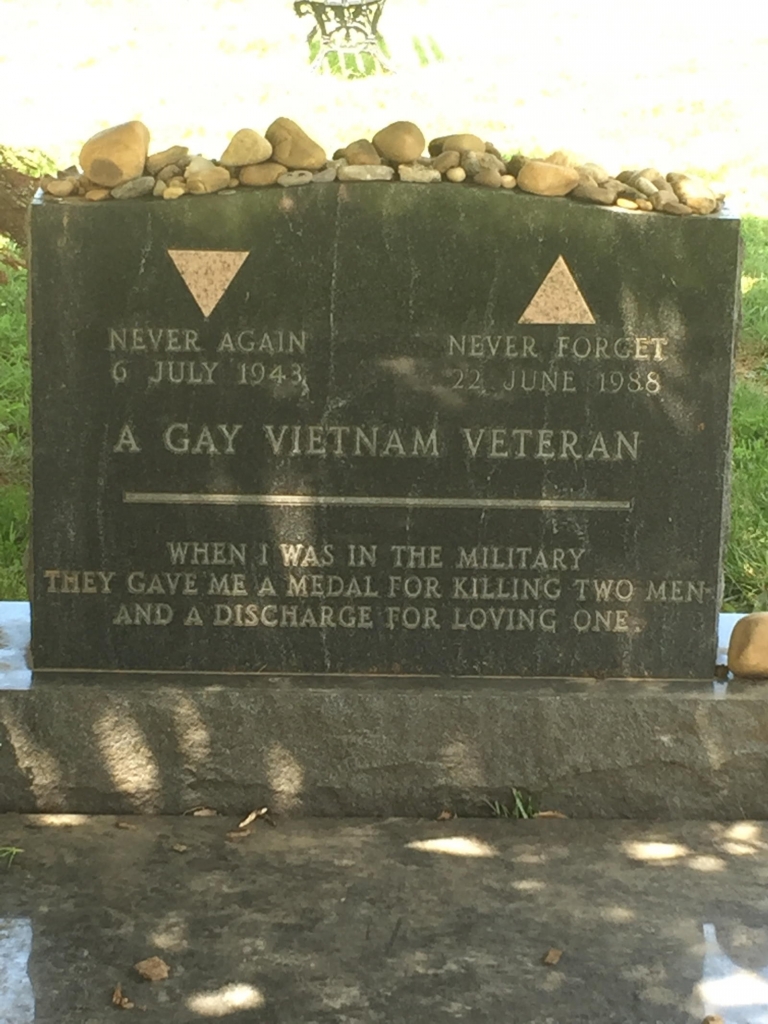 Matlovich’s headstone, the marker of one of the tour’s most emotional moments.

In a markedly different example, audio recordings from the bit on J. Edgar Hoover effectively portray the paranoia that marked his tenure as director of the FBI, especially in his later years. The man’s bleak take on society and heavy emphasis on “law and order” is clearly visible (well, audible) in something as seemingly small-scale as a speech at a Boy’s Club fundraiser. I strongly suggest giving this tour a listen if only for this reason: hearing such a collection of stories told largely through primary sources as these doesn’t just communicate the facts you could get from reading a Wikipedia page, but also deeply humanizes the dead buried here.

If my description has sufficiently intrigued you to check the tour out, don’t hesitate to hop on over to the app store now and give it a download! You can also listen to the tour on your computer, at the following link: https://izi.travel/en/b5a1-historic-congressional-cemetery-the-dead-tell-the-best-stories/en. Here are some pointers I’ll share for using the app: 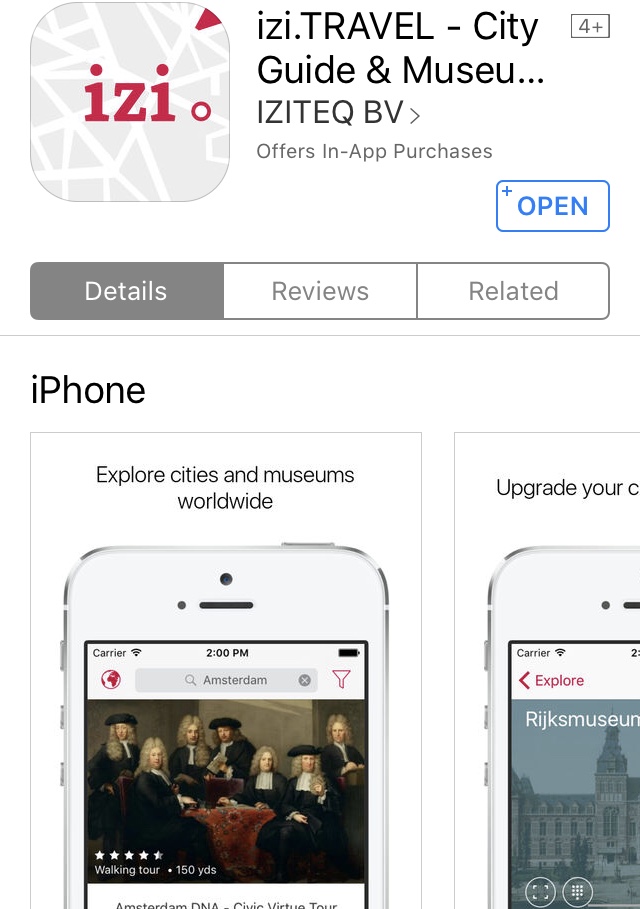 Here’s what the app looks like on the Apple app store.

Finally, although I mentioned this towards the beginning of my post, I’ll say it again: Liz has intended this tour to be a continual work-in-progress. She told me to get the word out that if anyone has a story they want to contribute, they should feel free to get in touch with her, either to meet with her and record it or send in a recording themselves. Plus, I hear she’s looking for someone to narrate a story on Marion Barry, so if anyone is interested in contributing, let us know. If you’ve got a story to share, please feel free to leave a comment, and I’ll get you in touch with Liz as soon as I can!