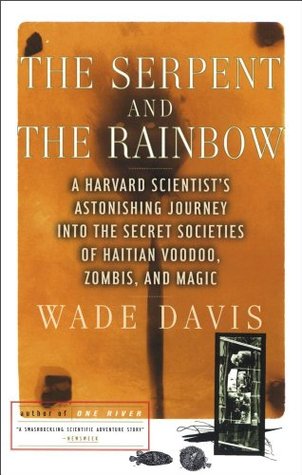 Location: hopefully outside at Congressional Cemetery

Selection:
The Serpent and the Rainbow: A Harvard Scientist’s Astonishing Journey into the Secret Societies of Haitian Voodoo, Zombies, and Magic
by Wade Davis

From GoodReads.com:
In April 1982, ethnobotanist Wade Davis arrived in Haiti to investigate two documented cases of zombis—people who had reappeared in Haitian society years after they had been officially declared dead and had been buried. Drawn into a netherworld of rituals and celebrations, Davis penetrated the vodoun mystique deeply enough to place zombification in its proper context within vodoun culture. In the course of his investigation, Davis came to realize that the story of vodoun is the history of Haiti—from the African origins of its people to the successful Haitian independence movement, down to the present day, where vodoun culture is, in effect, the government of Haiti’s countryside.

The Serpent and the Rainbow combines anthropological investigation with a remarkable personal adventure to illuminate and finally explain a phenomenon that has long fascinated Americans.

About Tombs & Tomes:
Tombs and Tomes is Congressional Cemetery’s book club. We meet every other month in our historic Chapel, and we discuss primarily non-fiction books. Our book selections have no rhyme and reason; however, our choices tend to stray towards the macabre, as is natural for a cemetery book club.

Our very first meeting was in September 2013 and we chose to read Stiff, by Mary Roach (pictured here with Doug Graves, Congressional Cemetery’s mascot and NOT a real skeleton!).

It’s free to join, and mostly free to attend. For each meeting, we simply ask that you bring either a donation or a bit of food or wine to share with the group. Extra points for brownies! (when we meet in person)

Interested in learning more? Read our Blog Post about Tombs and Tomes, or request to join our Goodreads group.