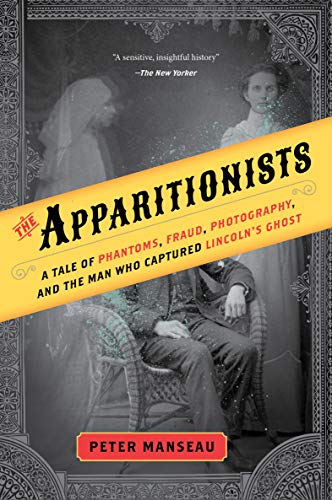 The Apparitionists: A Tale of Phantoms, Fraud, Photography, and the Man Who Captured Lincoln’s Ghost
By: Peter Manseau

From GoodReads.com:
A story of faith and fraud in post–Civil War America, told through the lens of a photographer who claimed he could capture images of the dead.

In the early days of photography, in the death-strewn wake of the Civil War, one man seized America’s imagination. A “spirit photographer,” William Mumler took portrait photographs that featured the ghostly presence of a lost loved one alongside the living subject. Mumler was a sensation: The affluent and influential came calling, including Mary Todd Lincoln, who arrived at his studio in disguise amidst rumors of séances in the White House.

Peter Manseau brilliantly captures a nation wracked with grief and hungry for proof of the existence of ghosts and for contact with their dead husbands and sons. It took a circus-like trial of Mumler on fraud charges, starring P. T. Barnum for the prosecution, to expose a fault line of doubt and manipulation. And even then, the judge sided with the defense — nobody ever solved the mystery of his spirit photography. This forgotten puzzle offers a vivid snapshot of America at a crossroads in its history, a nation in thrall to new technology while clinging desperately to belief.

Tombs and Tomes is Congressional Cemetery’s book club. We meet every other month in our historic Chapel, and we discuss primarily non-fiction books. Our book selections have no rhyme and reason; however, our choices tend to stray towards the macabre, as is natural for a cemetery book club.

Our very first meeting was in September 2013 and we chose to read Stiff, by Mary Roach (pictured here with Doug Graves, Congressional Cemetery’s mascot and NOT a real skeleton!).

It’s free to join, and mostly free to attend. For each meeting, we simply ask that you bring either a donation or a bit of food or wine to share with the group. Extra points for brownies! (when we meet in person)

Interested in learning more? Read our Blog Post about Tombs and Tomes, or request to join our Goodreads group.