And You Thought I Was Done with Introductions: Meet Our New Grounds Conservation Manager, Kymberly Mattern

Previous Next
And You Thought I Was Done with Introductions: Meet Our New Grounds Conservation Manager, Kymberly Mattern

Now that our previous Grounds Conservation Manager, Daniel Holcombe, has moved on to a new job, it’s time to welcome our new one, Kymberly Mattern! This Northern Virginia native recently moved back to the region upon completing her graduate studies. She studied History and Women’s and Gender Studies at Juniata College, which she described as a “really, really, really” small school in central Pennsylvania, before going on to receive a joint MS in Historic Preservation from Clemson and College of Charleston in May.  It was great to sit down and talk with not only a colleague, but also a fellow history lover, and I’m excited to share with you what she had to say. 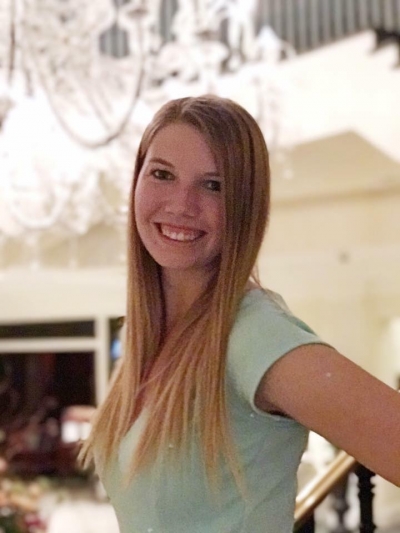 Kymberly has had quite a bit of experience in the field so far. Over the course of Summer 2016, she had an internship with United Building Envelope Restoration (or “UBER” – not to be confused with the ride-sharing app, as I briefly did when she first mentioned it), in which she did restoration work on Lorton Reformatory. Any of you reading from Fairfax County probably know exactly where she was working: it’s the historically-significant former Laurel Hill prison, where women protesting for political rights were jailed. Kymberly did a lot of hands-on work in this adaptive reuse project, laying bricks and pointing mortar and identifying areas that needed further restoration work, among other tasks.

Another past project she was excited to talk about was work she did on the Fireproof Building in Charleston as part of an advanced conservation class. She gave me quite a fun fact about the building that ties into DC history: it was built by Robert Mills, who designed the Washington Monument and is buried here in Congressional Cemetery! On this project, Kymberly worked with brownstone – an uncommon treat to work with in the South – and also was responsible for testing a chemical product’s effectiveness at removing stucco. These experiences have further solidified her interest in preservation, and we can’t wait to see how they translate into her work at the Cemetery. 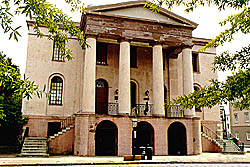 Kymberly was led to this position at the Cemetery by her long-held interests. She described her high school-self as loving both houses and history, and historic preservation was the perfect avenue to combine her love for the built environment and for the historic. Moreover, for her, it’s more than just a preservation job; she’s always been interested in cemeteries, places where she can wander around and look at stones, imagining people’s lives and what their experiences must have been like. There’s also an element of empathy to her love for working in a cemetery. She told me that oftentimes, there isn’t really anyone around to take care of peoples’ old stones, and she sees her work as an opportunity to preserve the memories of those whose memories risk being lost. Finally, she stated that it’s not that often that people with a deep interest in cemeteries stumble into an actual job in a historic cemetery and that they often only get to volunteer. For Kymberly, it seems like this makes the job even more of a unique opportunity! 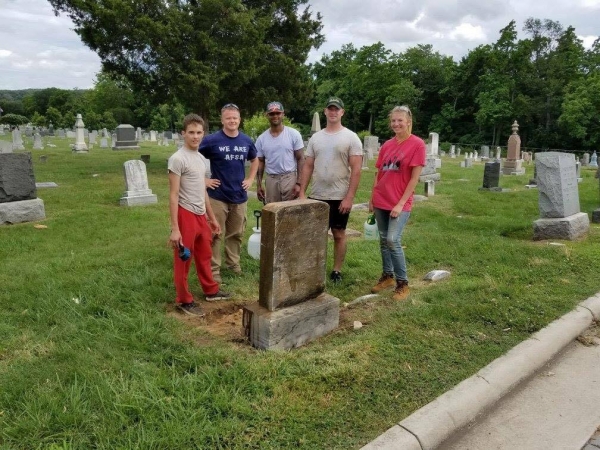 Kymberly in action, with Air Force volunteers working to reset a stone.

As she takes over as Grounds Conservation Manager, Kymberly hopes to focus mostly on restoring stones and structures; while she will also do some of the landscaping work, she expressed that she hopes to focus more on the built aspects of the Cemetery. Ultimately, she’s looking forward to uncovering more of the history of the people in the cemetery and events that people are associated with. I’ll leave you all with a quote from our interview that I think perfectly sums up why all of us at the Cemetery are so excited and passionate about our work: “There are 65,000-plus people commemorated out there, and every single person has a story to tell.” I look forward to seeing what Kymberly can do to help uncover these stories. As usual, if there’s anything you want to hear about in the near future, please don’t hesitate to comment!

By katelynbelz1|2019-07-26T12:27:44-04:00July 13th, 2017|News|Comments Off on And You Thought I Was Done with Introductions: Meet Our New Grounds Conservation Manager, Kymberly Mattern
FacebookTwitterEmail