Previous Next
James A. LaFontaine

Here at the Congressional Cemetery we strive to make the stories of the people interred here, and their roles in our history, more approachable.  We currently have 16 walking tours available online that cover a range of subjects from the brewers of D.C. to Civil Rights heroes, and we are adding more steadily.  These tours include the stories of more than two hundred people, and yet, this is still only a small fraction of the total number of people buried here.

Not everyone wants to sit down and read through a combination of obituaries, old newspaper articles, and other sources to try and gain a better understanding of an unknown person.  Yet somehow we have managed to assemble a staff along with a number of supporters that greatly enjoys doing that very thing.  We often joke that we spend rainy days searching our databases by things like Cause of Death.  But without fail, from time to time, each of us gets lost reading the story of a person interred here.

As the Grounds and Conservation Manager, I have a somewhat different approach to learning about new people.  I usually don’t “find” someone initially in an obituary or old article, but by their grave marker.  I was working on the grounds last fall when I noticed the headstone of James A. LaFontaine.  Tucked neatly back into the shade of a magnolia tree, it is a fairly simple monument that is nothing out of the ordinary. 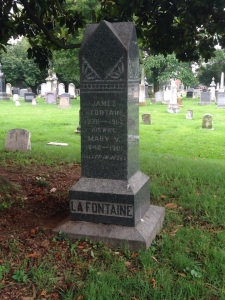 James was however far from an ordinary man.  Known as Jimmy to almost all that knew him, he amassed a small fortune by owning and operating the Maryland Athletic Club.  Today the Club is nearly forgotten, demolished in the early fifties, but even in its day nobody knew it by its formal name.  Everyone referred to it as Jimmy’s Place, or just Jimmy’s.  Located off of Bladensburg Avenue exactly on the line between Prince George’s County and the District, Jimmy’s Place was the known as being the best casino in the District.

Just as Jimmy wasn’t an ordinary man, however, Jimmy’s Place was not an ordinary casino.  Jimmy’s Place did not permit in any fashion guns, women, or alcohol.  It was nothing like casinos today, any sort of disturbance whether out of joy or misery would see you escorted out of the front door immediately.  The entire casino was quiet, with only the low voices of the dealers and the quiet shuffling of cards able to be heard.

Legends grew around old Jimmy and the joint he ran. One night a man lost $3,000 at the dice table and left quietly.  As was the custom, Jimmy sent him home in a chauffeured hack.  Several hours later there was a furious racket at the guarded front door of the place and a woman was pulled into the vestibule by guards who didn’t want to see the police awakened.  Women ordinarily were not permitted in Jimmy’s place.  But this one bawled at the top of her lungs that her life’s savings of $3,000 had just been squandered by her ne’er-do-well husband, and she was going to every newspaper in Washington and Baltimore and tell all… unless.  Jimmy gallantly paid her the money and told her never to let that bum of hers go gambling again.

Couple of nights later the fellow came back and was nearly slugged.  But he finally got them to understand that (1) he had no wife; (2) he had a lot of money and would like to play; and (3) he had picked up a streetwalker at 15th and H Streets, N.E., on the way in that night, had told her he lost $3,000, and was surprised when she jumped out of the car and took off in the opposite direction.

After reading many articles from across the country detailing Jimmy’s casino and later legal troubles, the common theme is that nobody actually disliked him.  A 1949 Kingsport News article even mentions that the judge that found him guilty of tax evasion would go on to say “Apart from his admittedly illegal business activities, his character is probably otherwise exemplary”.  Jimmy goes from being listed with the likes of Al Capone as a racketeer, to being mentioned as one of the finest of people.  His name appears in a number of papers as having sponsored advertisements aiding in the WWI war effort, as well as donating a Great Horned Owl to the Smithsonian Zoo. 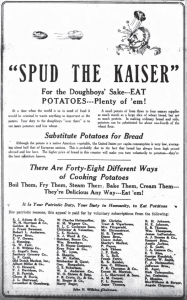 “Spud the Kaiser” The Washington Herald, 1918 James A. LaFontaine listed in the last column

Charles Price, a writer for Sports Illustrated whose father managed the casino,  tells a story in this article about Jimmy that wouldn’t be believable if it were about any other man.

At the height of Prohibition, Mr. Jim had been kidnapped by some out-of-town racketeers for $40,000 ransom. Three men spirited him, blindfolded, to a backwoods cottage in Virginia. There they waited for three days, but nobody offered to pay Mr. Jim’s ransom. That bothered Mr. Jim not at all. He whiled away the time napping, telling stories and puffing on his Havanas. To kill time, he suggested that they play some hearts. Mr. Jim beat them out of several thousand dollars for which he took a marker.

On the fifth day the kidnappers began getting nervous. Mr. Jim, on the other hand, was enjoying himself immensely. He was playing cards against three of the biggest patsies he had ever seen. Finally, one of the men blew his stack. “Why doesn’t somebody pay your ransom?” he demanded. “That’s easy,” said Mr. Jim. “I’m the only guy I know who’s got $40,000, and nobody knows where I keep my money. But I’ll tell you what. You take me home, and I’ll get your money for you.”

The kidnappers looked at him in disbelief. Then they turned to each other and shrugged their shoulders, as if to ask what they had to lose. They drove Mr. Jim to his row house, the sight of which must have convinced them that he had pulled a fast one on them. But, true to his word, Mr. Jim strolled into the house, kissed Miss Annie on the cheek as though he had been away on a business trip, then walked back to the car with 40 thousand-dollar bills. He counted out 36 of them and tucked the other four back in his pocket. “These are what you owe me for the hearts game,” he said and walked away.

Jimmy’s business had survived for more than twenty years even though it was not entirely legal.  The benefit of being on the border of D.C. and Maryland is that anytime the Maryland police came to raid the casino, its patrons would simply cross the line into the District, and vice versa.  Multiple sources state that all of the gaming tables were on wheels, and when police would raid from one side of the line, the tables would be moved to the other, out of the police’s jurisdiction.  He would continue to run his casino until it finally closed in 1947; his health was failing and nobody else could run Jimmy’s but the man himself.  When he passed away on November 21, 1949, his estate included more than two million dollars in cash that he kept in small safes in his various properties around the city.

From all walks of life they came one by one and in small groups to file slowly past the bier of “Jimmy”.

And then little knots of old friends gathered in the anteroom of the Lee funeral home, but the talk dwelt only momentarily on the days when James A. (Jimmy) LaFontaine was king of the gamblers.

The body of the fabulous little man, who died Monday at the age of 81, lay in state last night in the funeral home at Fourth street and Massachusetts avenue N.E. and was on view again today. Requiem high mass will be sung for him at 10 a.m., tomorrow in St. Dominic’s Church.

Out in the anteroom, after a final look at “Jimmy,” many old frieds, some in crisp new business suits and a few in leather jackets gathered and talked the small talk that hides emotion.

For many, the last visit to “Jimmy” became an occasion to greet other friends unvisited for years. Words like “Where have you been you old rascal?” flashed several times across the room.

But, as one small, thin-haired man in Navy peacoat said:

James was laid to rest here in a site purchased by his sister, Rose, on the 24th of November following the mass at St. Dominic’s Church.  His wife, Annie B. LaFontaine, would join him here a little more than a year later.