Not Dead, But Arisen: Victorian Spiritualists in Congressional Cemetery

Previous Next
Not Dead, But Arisen: Victorian Spiritualists in Congressional Cemetery

At a recent Tombs and Tomes book club meeting, the group discussed Mary Roach’s Spook: Science Tackles the Afterlife, an apropos selection for a cemetery book club. Roach is a well-known science writer who has delved into a variety of subjects, from dead bodies (Stiff) to the physiology of sex (Bonk), and everything in between.  Stiff was the book club’s very first read, and it was almost unanimously enjoyed by all readers. However, Spook was a different story. Roach’s logic and scientific skepticism muddled rather than clarified the narrative, and it seemed that the author spent an inordinate amount of space ridiculing rather than exploring the possibilities. In one admittedly entertaining section of the book, Roach explained the Victorian era origins of spiritualism, and proponents of the early moment happened to serve as easy targets (just Google ectoplasm to get a sense of the subject matter). But Tombs and Tomes readers as a whole felt uneasy about Roach’s conclusions, or lack thereof, especially when we discovered that we had a spiritual medium in our midst. Is science even equipped to handle this heady subject?

Far be it for a humble and necessarily short blog post to ponder the big questions. But it is possible to explore the breadth and depth of the rise of spiritualism through the example of a few HCC residents. Briefly described, spiritualism relies on the belief in communication with the beyond and the dead. The movement began in the 1840s and entrenched itself during the American Civil War. Spiritualism still exists today, and the origins and evolution of this movement can be explored at Congressional Cemetery. (And just as an aside, there’s a great Smithsonian article The Fox Sisters and the Rap on Spiritualism that describes the origins of movement).

Belief in an afterlife is naturally expressed on many a headstone, as you would expect in any cemetery. But if you’re wandering around the Congressional Cemetery grounds, you might find a few that vary from the customary religious iconography and epitaphs. For instance, take the example of Emily Douglas Forrest, widow of Commodore French Forrest. She is buried next to her husband, whose headstone dutifully notes his birth and death dates in a traditional manner. However, Emily’s is a bit different: 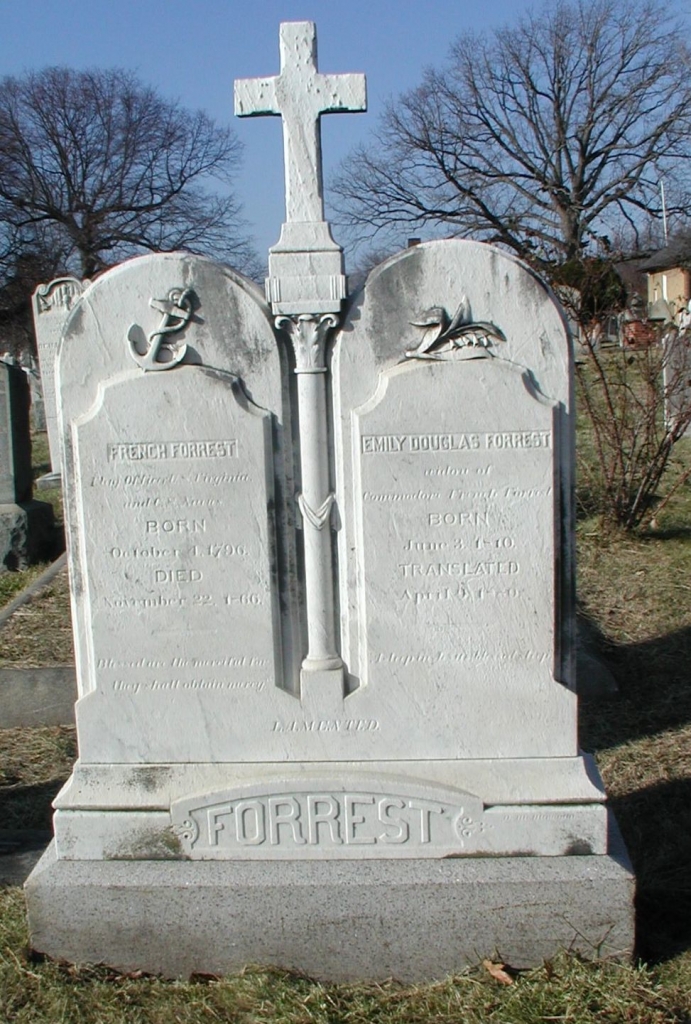 Emily had a different choice of words describing her ultimate demise, noting that she “translated” on April 9, 1880. Her headstone hints heavily at a belief in spiritualism, especially considering the juxtaposition with her husband’s more commonplace description.

Other headstones at the cemetery are even more explicit. John B. Wolff’s marker, which also happens to be a zinc monument, notes that he is “not dead, but arisen.” Wolff is credited with organizing the first association of spiritualists. A 1910 Washington Post article described Wolff as “a Washingtonian and an ardent worker for the cause of spiritualism, Mr. Wolff, who was for some years the president of the local association here, desired a national organization, and declared he would work for the cause just as earnestly after his death as while he lived.” The national organization finally coalesced in 1893, after Wolff’s death, and it is certainly due to his enthusiasm and influence (during his lifetime, at least), that an organization formed. 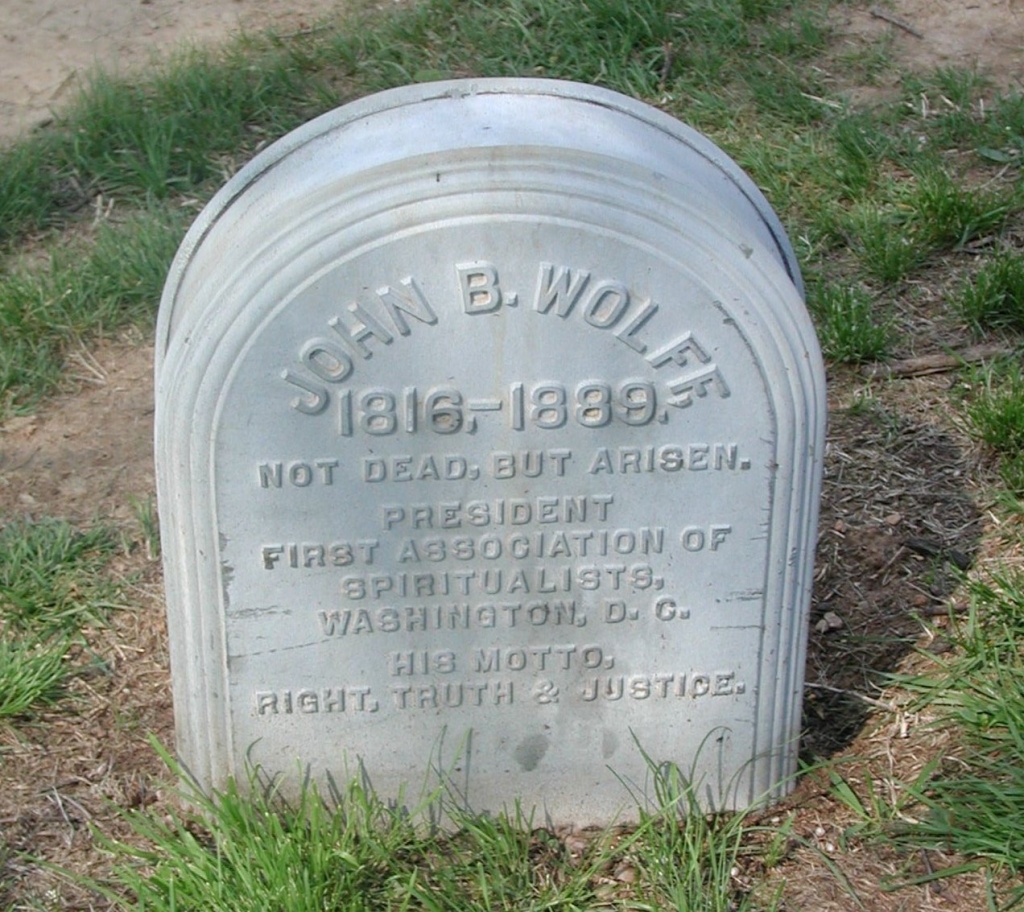 Of course, not everyone posted their beliefs for all to see on their headstone. For instance, Mary C. Levy’s epitaph notes that she is “gone but not forgotten,” a common sentiment echoed on many memorials. But the Congressional Cemetery archives recognize Levy as a “well-known spiritual medium,” although her obituary also notes that she had “several grown children, none of whom share the faith of her parents.” Perhaps that explains the lack of explanation on her headstone.

In the case of Margaret Ann Laurie and her daughter Belle Youngs, likely the most famous spiritualists interred in the cemetery, no headstones exist at all. HCC’s Women of Arts and Letters walking tour describes Margaret and her daughter Belle: “these dedicated spiritualists contacted the dead for messages and used “magnetic” powers for healing. Laurie produced physical phenomena such as levitating pianos. Their house, a center of spiritualist séances, was visited by the Lincolns, and Laurie became a frequent visitor at the White House to conduct séances. The President’s aides warned her to keep these spiritual activities secret to protect Lincoln’s public image.” The Lauries and Youngs often appear in discussions of 19th-century spiritualism because of their connection to Mrs. Lincoln, known to be an avid spiritualist.

A cemetery is an ideal place to explore what other people thought – and still think – the end is all about. As our book club discovered when reading Spook, it’s impossible and unreasonable to use scientific methods to assess the afterlife. But whatever you believe about the great beyond and spiritualists’ opinions, it is certain that the dead do and can communicate their stories through epitaphs, obituaries, newspaper articles and memoirs. It just takes a little researching to hear what they’re saying.

For more on the Lauries and the Youngs (who deserve their own blog post), see Unlocking the History of a Lincoln Relic, from spirithistory.iasop.com.

One of the author’s favorites, Marguerite du Pont Lee, who didn’t make it into the blog post (sorry, Marguerite!), was also a spiritualist. She even wrote a book called Virginia Ghosts, which is a great read.