Let’s Play a Game, Shall We?

Previous Next
Let’s Play a Game, Shall We?

We have a friendly challenge here at Congressional Cemetery: give us an American historical event and we’ll find you a connection to a cemetery resident. No promises on how relevant or direct the connection will be, but we’re able to find an abundance of tidbits and trivia that can connect most events in American history to the cemetery or one of our 65,000 residents. You can call it our version of Six Degrees of Kevin Bacon.

For instance, if we flip the game and connect an individual to an event, let’s consider the Hon. Warren Ransom Davis. At first glance, his obituary seems rather standard for a 19th-century Congressional Representative. Studied law, practiced in South Carolina, elected to Congress and served until his death. Buried at Congressional Cemetery. 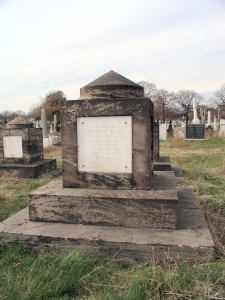 However, closer inspection reveals he has a connection with one of the more dramatic stories from American history, the very first assassination attempt on a President of the United States. Davis wasn’t actually around to witness the attempt, but that’s neither here nor there, as President Andrew Jackson was attending Davis’ funeral at the Capitol when the incident occurred:

From the National Intelligencer, Saturday, January 31, 1835

“As the President of the United States (Jackson), who was present at the solemn ceremony of the funeral, came into the portico of the Capitol from the Rotondo, a person stepped forward from the crowd into the space in front of the President, and snapped a pistol at him, the percussion-cap of which exploded without igniting the charge! This person was struck down by a blow from Lieutenant Gedney, of the Navy, who happened to be near; he also received a blow promptly aimed at him by Mr. Secretary Woodbury; but, before receiving either blow, snapped a second pistol at the President. The cap of that lock also exploded without igniting the charge!” 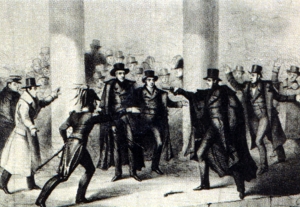 “JacksonAssassinationAttempt” by Original uploader was Bonus Onus at en.wikipedia – Transferred from en.wikipedia. Licensed under Public Domain via Wikimedia Commons.

Other versions of the event claim that Jackson, who was at that time well into his 60s, went after the perpetrator with his cane after the first shot. Either way, dear old departed Mr. Davis, a future Congressional Cemetery resident, was part of this bizarre and dramatic moment in American history.