When President Abraham Lincoln told his bodyguard about whom he feared potentially assassinating him the most, it wasn’t the disgruntled, Confederate-sympathizing actor John Wilkes Booth. Rather, it was a somewhat bizarre Polish man who had renounced his old citizenship, became a spokesman for tsarist autocracy in Russia, and ultimately moved to the United States and became an aggressive champion of the Radical Republican cause. This man was none other than Count Adam Gurowski, who calls Historic Congressional Cemetery his permanent home.

Gurowski was well-known in Washington for his bizarre behavior and strong convictions. According to LeRoy H. Fischer, he once held a DC firefighting brigade at gunpoint to get them to do their job faster; moreover, he challenged a Harvard professor to a duel early in his American career over a Hungarian history factoid, seemingly an overreaction to such a small conflict. While many who knew him well, such as Walt Whitman, considered him to be all bark and no bite, Lincoln was nevertheless discomfited by his eccentric airs. Beyond his personality, Gurowski’s frequent letters to Lincoln, in which he appoints himself as an advisor and rails about the administration’s missteps, and his vehement criticism of the administration in his infamous Diary publications certainly did not help his case. While Gurowski was ultimately more of an embarrassment than a threat, his behavior has led some to christen him “Lincoln’s Gadfly.”

Born in Poland to a noble family in 1805, he displayed a proclivity for political provocation early on in his life; a Russian duke had him expelled from his secondary school for displays of Polish nationalism. Despite this blip on his educational timeline, he went on to become a student of Hegel. Soon after, he returned to Poland and became involved in an uprising against Russian influence in the 1830s. While his importance within this movement has been a matter of debate among scholars, it was enough for the tsar to sentence him to death and confiscate his land while he was in Paris. This began a chain reaction of ideological transformations, though whether they were for protection from punishment or out of genuine conviction is difficult to prove. Gurowski abruptly declared that he was no longer Polish, publishing a pro-Russia tract won him favor in Nicholas I’s court. Now pardoned, he served as an advisor to the tsar on the Russification of Poland before yet again becoming disgruntled and leaving for Prussia. Ultimately, his dissatisfaction on the continent led him to the final leg in his migratory journey in 1849, to the United States. 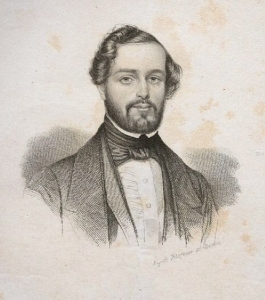 A depiction of a young Gurowski, sans mutton chops.

Gurowski had incorrectly surmised that his previous experience teaching at Universities in Europe would make him a candidate for a professorship at Harvard. Gurowski soon found himself writing for the New York Tribune, owned by eccentric future presidential candidate Horace Greeley. From his post at the Tribune, Gurowski furiously attacked politicians such as Daniel Webster for holding conservative or moderate positions on slavery. In the meantime, he continued publishing pamphlets and tracts promoting pro-Russia sentiment during the Crimean War. Moreover, one of Gurowski’s most infamous acts at the Tribune included censoring anti-Russian content out of pieces by Marx and Engels; Marx himself referred to Gurowski as an agent of the tsar on more than one occasion. His continual support for the Russian state, despite his intellectual and personal falling out with Nicholas I’s regime, has led some scholars to conclude that his adoption of fervent Pan-Slavism was always more out of conviction than self-preservation.

Before too long, Gurowski found work in DC under Seward in the State Department, scanning European newspapers for articles of interest to the Lincoln administration. Ultimately, when he Published the first installment of his Diary, a series of tracts on his political opinions in which he served up biting criticism of the administration, Seward fired him and very publicly sued him for libel. While the libel case was ultimately dismissed, it further fueled Gurowski’s disgruntlement, leading to the publication of two more venomous Diary installments. As Gurowski’s political views continued shifting away from autocracy, his views on slavery became even more negative. Intellectually, Gurowski viewed America as the instigator of a new epoch in world history. He believed America would upend the trend of various uniform ethno-states replacing each other as world leaders with a new, multi-ethnic and multi-religious civilization, built on free enterprise and liberty – an impossible task to fulfill if an entire race was still oppressed.

A modern-day cover of a Gurowski Diary Installment.

Gurowski began arguing openly with politicians about slavery more and more: in his book America and Europe, an entire chapter was devoted to the evils of slavery, and his 1860 book Slavery in History posited that domestic slavery always led to the demise of the civilizations it infected. His abolitionist convictions led him to attempt to jump into action right away at the beginning of the Civil War: he was one of the first men to join an emergency battalion stitched together to defend DC against a potential Confederate attack, and he tried to convince Secretary of War Stanton to arm blacks before the administration was ready to do so.

While his early agitation in 1861 led General in Chief Winfield Scott and Seward to chide him, his anti-slavery activism would only increase throughout the course of the war; this led him to his most famous project, his advisory letters addressed directly to President Lincoln himself. These letters largely fell in line with the policy goals of Radical Republicans in Congress, who objected to Lincoln’s moderate approach to abolition, hesitancy about Confederate property confiscation, conservative generalship under the likes of McClellan and Halleck, and approach to Reconstruction. He continually trashed Secretary of State Seward, his former boss who sued him, even sending a letter on this topic to Lincoln’s wife: in one letter, he went as far as to claim that “Mr. Seward is held in utter contempt by…European diplomacy,” going on to characterize the official as a flip-flopper.  He also claimed in another that General McClellan, distrusted by Radicals for his cautiousness on the battlefield, was a “half ass traitor” whose generalship was contributing to the ruin of America. He continually attempted to persuade Lincoln to take to the field in command of his troops and create a European-style staff of military advisors that he, of course, wanted to be a member of.

Gurowski’s favorite “half-ass traitor” and a frequent target of his writing.

While it is unclear whether or not any of these letters actually made their way to the President’s desk, and Gurowski was certainly not unique in sending frequent unsolicited advice to the administration, his letters truly stand out because of their eccentric tone and the unique background of the man who wrote them. Lincoln would have no reason to desire to read Gurowski’s letters, especially as Gurowski became more venomous in his public attacks on the President: after the Battle of Fredericksburg, Gurowski said of Lincoln that “you cannot fill his small but empty skull with brains; and when in the animal and human body the brains are wanting, or soft or diseased the whole boy suffers or is paralyzed, so with the nation.” Despite Gurowski’s inability to actually affect war policy, his letters certainly enliven the memory of this bizarre figure in Washington history, whose funeral here in 1866 was said by Whitman to feature the presence of all prominent Radical figures in DC. He is buried in the family plot of Washington socialite Fannie Eames, who always welcomed Gurowski into her parlor for discussion with other Radical guests such as Charles Sumner and Julia Ward Howe and are said to have cared for him in his dying days. 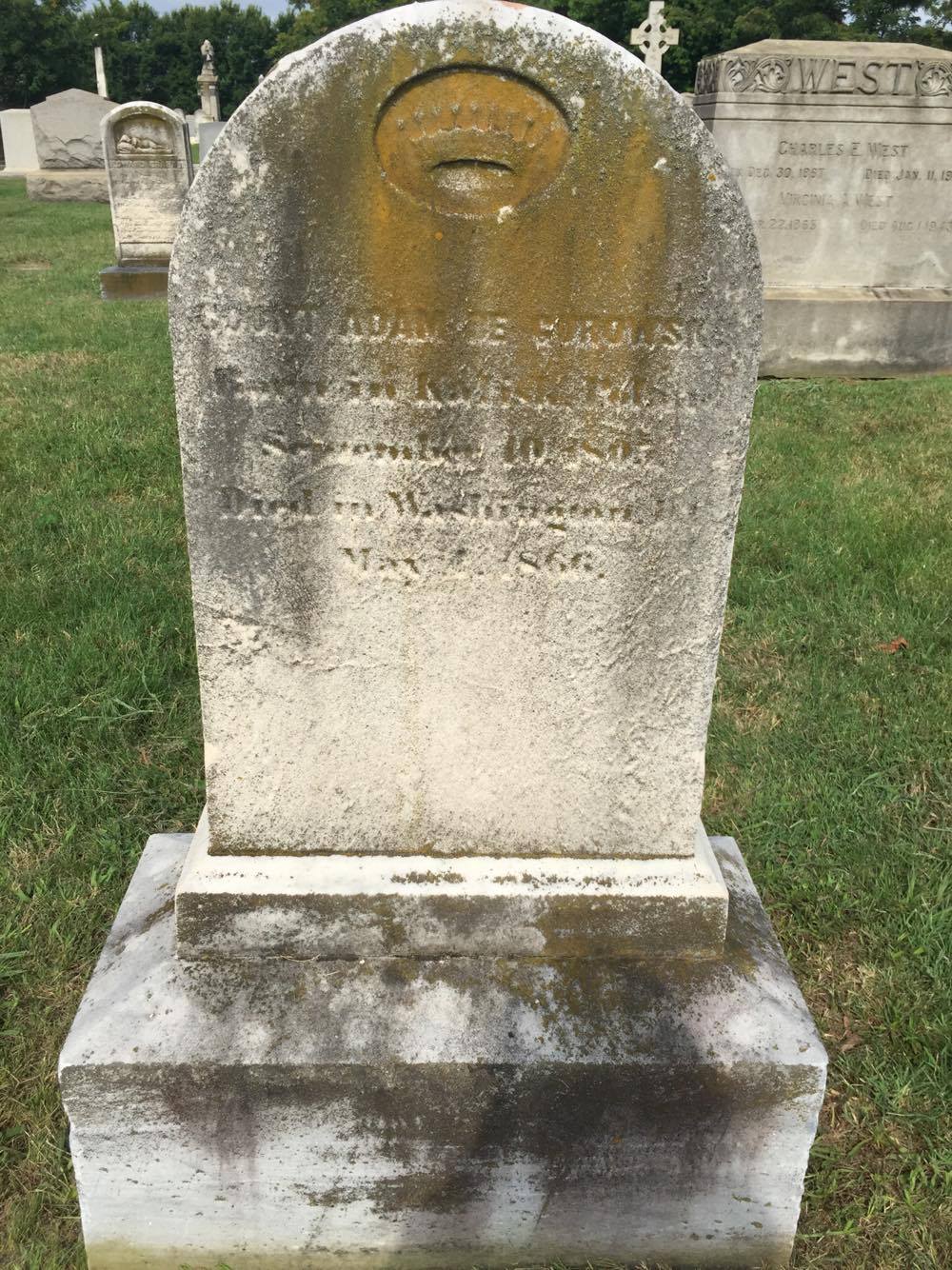 Wieczerzak, Joseph W. “Review: SOME FRIENDLY SWIPES AT ‘LINCOLN’S GADFLY’: Lincoln’s Gadfly, Adam Gurowski, (Winner of the $5,000 Literary Award of the War Library and Museum and the Pennsylvania Commandery of the Military Order of the Loyal Legion of the United States) by LeRoy H. Fischer.” The Polish Review 10, no. 1 (Winter 1965), 90-98.