Hello, friends of Historic Congressional Cemetery! It’s me again, Hannah.  I hope everyone has been enjoying their week and has had the opportunity to make it out to HCC at some point this summer!

Being an intern has given me several amazing opportunities to spend time at the cemetery–attending the Twilight Tours, going to the Cinematery to see Singing in the Rain, and then again, this past Friday, I had the pleasure of getting to know HCC’s other intern, Darren Messing! I figured that you’d all heard enough about me and it was about time to hear from Darren (who assists with the cemetery’s groundskeeping, maintenance, gravestone repair, and just about anything else that needs to be done).

Darren agreed to meet with me so that I could learn his story and then share it with you all, and it was very eye-opening to see all of the hard work that he and Grounds Conservation Manager Daniel Holcombe do every day to ensure that HCC can be the beautiful place we all love and enjoy.

First, let me share a few details about Darren’s background. Darren moved out here to Washington DC from Michigan, where he studied Anthropology and Art History at Central Michigan University. His family still lives in a small farming town called Deckerville, where he plans to return once his summer internship with HCC is over. Of Washington, Darren says “This is the only city I’ve ever been to that I actually enjoyed. I’m really more of a country boy, but I’m really gonna miss the cemetery once I go home.”

Darren was offered this internship here at HCC without any set hours, allowing him to work another part-time job if he so desired, but Darren can be found at the cemetery 40 hours a week, working from 7am-3pm every day, completely voluntarily.  When I asked him what he liked so much about working at Historic Congressional Cemetery, he had a lot of answers. For one, he gets to do hands-on work every day, which is fun for him, but he says he also really enjoys the people he gets to work with. 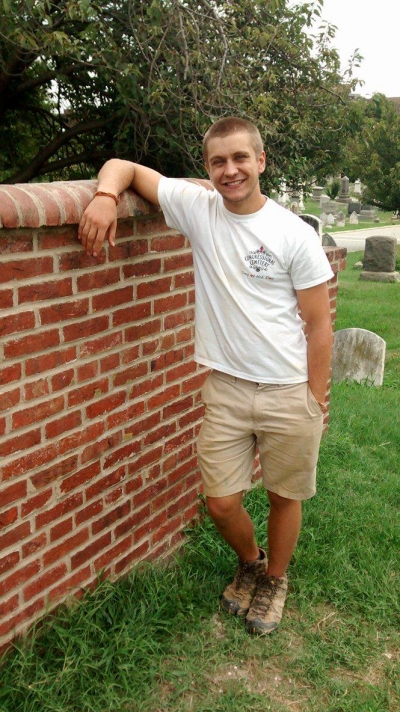 After I’d asked Darren to tell me about himself and what he does for the cemetery, I asked him if he’d show me around to his recent projects and favorite places in the cemetery. So, we loaded up into the John Deere Gator and he took me on a little tour.

The first project Darren showed me was some brick repair on the Richards Vault. Dotted throughout the cemetery are several vaults, and this particular one needed to have some damaged bricks chiseled out, replaced, and then tuck-pointed–an arduous but good learning experience for Darren.

One question about Darren’s work that I was most interested in was gravestone repair, because old cemeteries always seem to have broken or crooked headstones, and so I asked Darren to show me one of the headstones that he and Daniel repaired this summer.

This particular headstone was paid for by donation in memory of Nicholas Alexander “Koyla” Dunaev, a man famous for his circus-act talent of bending dimes with his fingers. The headstone itself was purchased through a supplier, but Darren and Daniel had the difficult task of constructing the foundation upon which the headstone was placed. For other headstones, perhaps smaller ones, it’s Darren and Daniel’s job to correct them when they may become crooked, most likely due to natural erosion, which involves digging them out and resetting them. 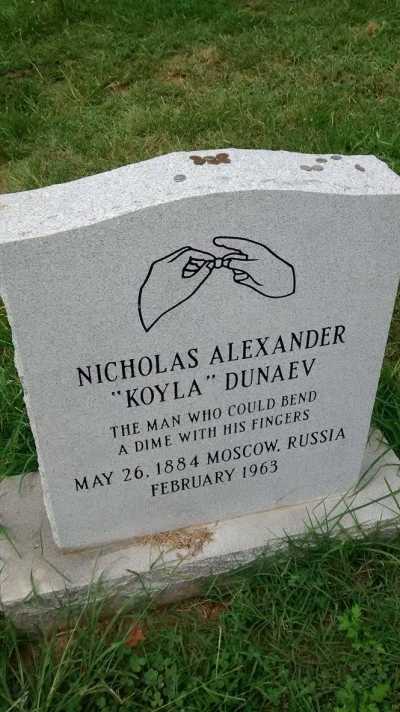 Also, for those of you who attended the Cinematery a couple of weeks ago, Darren and Daniel were responsible for erecting the giant move screen that displayed the film. So, Darren’s work is all-encompassing. If HCC needs something done, he’s the man to help get it done.

At the end of our interview I asked Darren to show me his favorite places in the cemetery, which is how I unexpectedly learned that HCC has a little vegetable garden with cucumbers, tomatoes, corn, string beans, and even a habanero plant! (Luckily for me there were two ripe cucumbers and he let me enjoy one for lunch!) 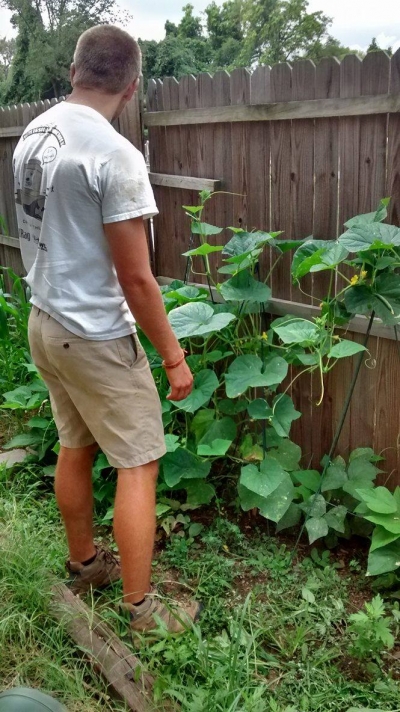 Darren will be with us until the end of August, which means he may be making an appearance at the Operation Conservation workshop later this month, but he plans to return home to Michigan and hopefully become involved in the historical societies out there.

So, the next time you find yourself walking the beautiful brick paths at Historic Congressional Cemetery, admiring the old graves and scenic views, be sure to thank Darren for his hard work maintaining the grounds. The cemetery requires a very devout team of preservationists, and our goal is to be able to share that passion for history with the community and hopefully continue HCC’s legacy for years to come.

Thank you for taking the time out of your busy week to support Historic Congressional Cemetery! If there’s anything in particular that’d you’d like to read about on the HCC blog, be sure to leave your comment below and we’ll do our best to keep it full of interesting and new posts.

By laurenmalo|2019-07-26T11:59:34-04:00August 18th, 2016|Uncategorized|Comments Off on An Interview with Historic Congressional Cemetery’s Intern Darren Messing
FacebookTwitterEmail