A Labor of Love: Adopting a Plot at Congressional Cemetery

Previous Next
A Labor of Love: Adopting a Plot at Congressional Cemetery

This week’s blog post comes to you from Beverley Lumpkin, a K9 Corps member and winner of the 2014 Benjamin B. French Lodge No. 15, F.A.A.M. Volunteer Award from Congressional Cemetery. In addition to volunteering her time on numerous committees, she maintains a plot through the Cemetery’s Adopt-a-Plot program. More on this saga from Beverley: 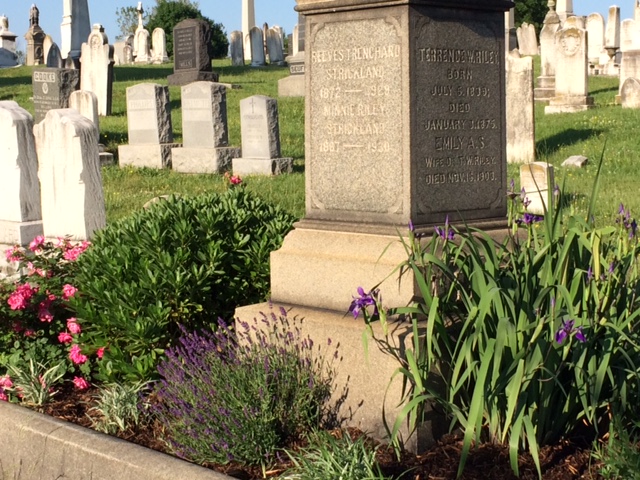 A few weeks ago, as the irises in my “adopted” plot at Congressional Cemetery finally started blooming, a number of dog walkers complimented me on how beautiful my plot was looking.

Three years ago, when Grounds and Conservation Manager Daniel Holcombe announced the new adopt-a-family-plot program I thought it would be fun to have a new space to garden.  I chose the Riley family plot on the “main drag” because I liked its central location and the lovely obelisk.  Only later did I realize how far it is from any water spigot.

I began by planting green and white liriope around the perimeter, reasoning that it is hardy enough to withstand the (ahem) attention of dogs.  I also put in two gaura, sometimes called butterfly flowers because of the tall fronds with tiny flowers that wave in the breeze like fluttering butterflies.

But the big deal was the irises.  I bought 12 bulbs of assorted colors ranging from white to blue to purple.  The clay earth had been turned over by Daniel and Mr. King, the groundskeeper, but it was still hard as brick on the sultry hot day I planted them. I sweated buckets but felt so good when it was done.  Then the wait began.  The next spring I kept checking daily but … no irises ever appeared.

Cruel disappointment!  Last year I went to Fragers and bought two iris plants that were already blooming.  Again the laborious digging and planting, and I mentally dared them not to return this year.

So that’s why it is such a thrill to see the beautiful deep purple irises, surrounded by lavender, backed up by pink knockout roses, with the gaura coming along and the Montauk daisy biding its time till autumn.  Thank you garden gods!