Previous Next
Royall-y Ever After 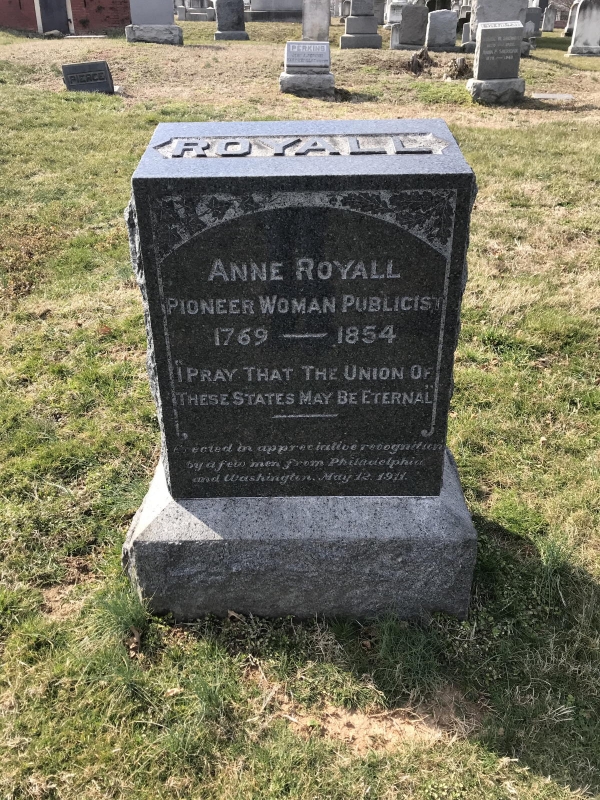 If there is one word that can be used to describe Anne Royall (Range 26, Site 194), it would likely be “eccentric.” As Senate Doorkeeper Isaac Basett put it, Royall was “homely in person, poor in purse, and vulgar in manners.” Royall did not care much about her physical appearance, she was said to have had a “tart tongue,” and she stuck firmly to her strong, unfashionable opinions. Nevertheless, Royall made significant contributions to social history and journalism. Royall’s work offers a glimpse on social customs, institutions, and personalities of her time while also demonstrating the power of the press to serve as a watchdog of freedom against government corruption and abuse.

Anne Newport Royall was born on June 11, 1769. As a young child, Royall’s father taught her how to read and write before Royall briefly attended school in a log cabin. In 1787, after the likely death of her father, Royall and her mother moved to Sweet Spring Mountain, now in West Virginia, to work for William Royall. William Royall is credited for introducing Royall to the works of notable philosophers, including Thomas Paine and Voltaire, and instructing Royall on Freemasonry. In 1797, Anne Royall married William Royall. Consequently, Anne Royall managed her husband’s estate until his death in December 1812. Fortunately for Anne Royall, she had no children, which gave her the freedom and ability to travel and write.

After her husband’s death, Royall sold her husband’s plantation and gave into her urge to travel. From 1824-1830, Royall traveled extensively across the United States. Royall supported herself and her adventures primarily through writing; Royall documented adventures that were subsequently published in nine different volumes. Royall also petitioned the federal government for a pension because she was a Revolutionary War widow. While Royall did continue to travel across the country, she ultimately settled down in Washington D.C.

In 1827, Royall tested the waters of fictional writing when she published The Tennessean, a historical romance novel that described a secret expedition of frontiersmen to Spanish-ruled New Mexico.

On December 3, 1831, with the help of Sarah Stack, Royall launched a four-page weekly newspaper, Paul Pry. This newspaper contained ads, humorous and poetic fillers, local news, political news, and editorials. Paul Pry was notable for its exposés on government graft and the Bank of the United States, editorials pleading for civil service and health reforms, and attacks on anti-Masons and evangelicals. The last issue was published on November 19, 1836 before it was succeeded by the Huntress, where Royall denounced beef monopoly, defended Catholic foreigners, berated legislators for hindering improvements to western states, and argued against the tactics of abolitionists (although Royall opposed slavery). As Royall got older, she depended more on the help of other for the Huntress.

Supposedly, if a member of Congress subscribed to Royall’s newspaper, she only wrote positive things about them. As a result of her articles and exposes, Royall is credited as being the first female Congressional Correspondent. Royall was particularly passionate about the dangers of merging church and state.

Royall was convicted of “common scold” (public nuisance) for berating members of a neighboring evangelical congregation, who allegedly “tormented” her with heckling and stones, usually at night. Typically, a conviction of common scold resulted in dunking. However, Judge William Cranch fined Royall $10 with a $100 bond as a guarantee for her Royall’s future conduct. The congregation met in a federally-funded firehouse near Royall’s home. Royall did not approve of the merging of church and state and vocalized her opinion.

Royall died on October 1, 1854. She had very little money at the time of her death, and she did not receive a headstone until 1911. Royall is just one of many notable women buried at Congressional Cemetery.