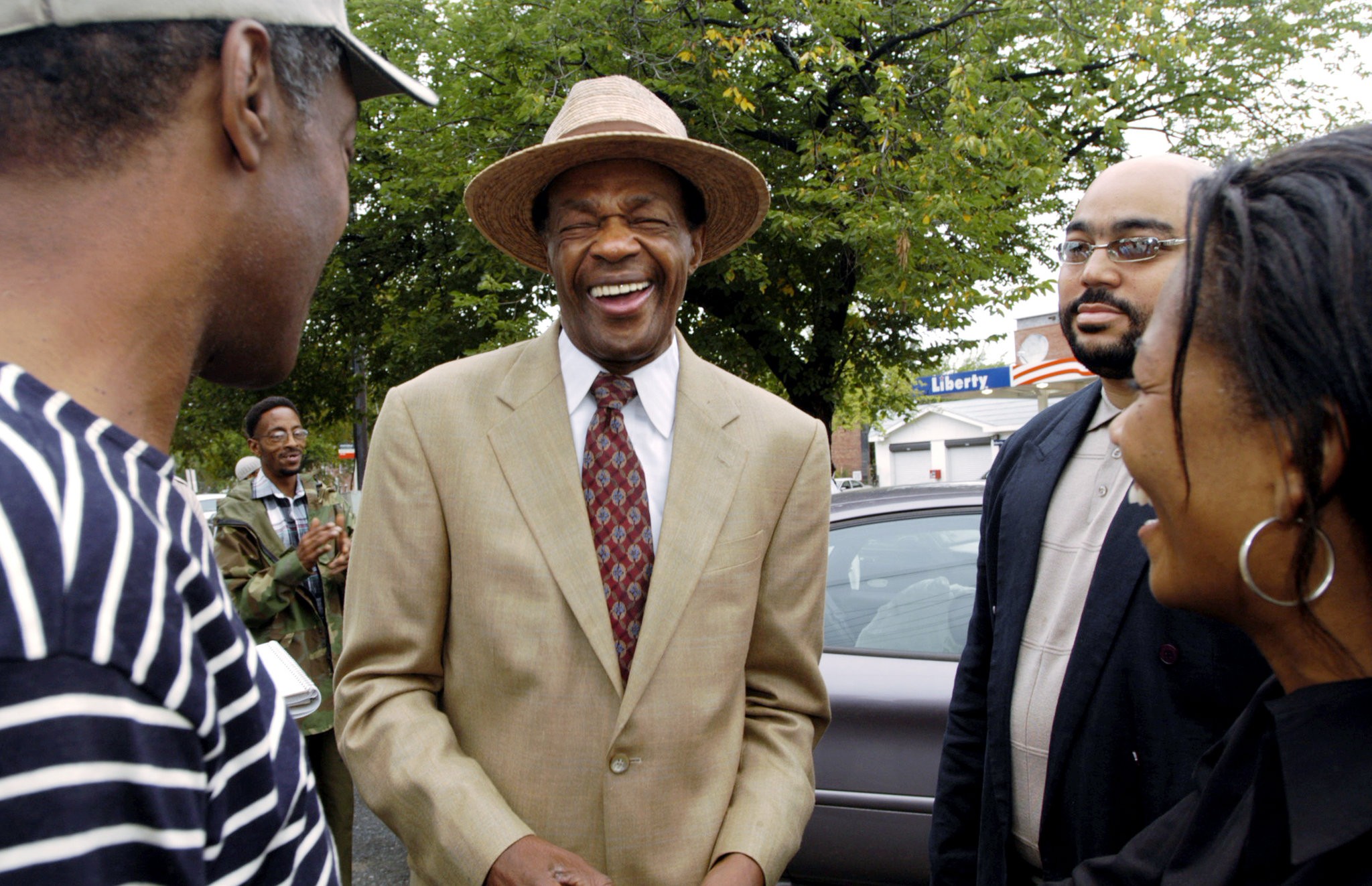 Marion Barry after his 2004 victory in the Democratic primary race for a seat in the D.C. Council. Photo Credit: Carol T. Powers from the New York Times

On March 6, 1936, Marion Barry, Jr. (Range 20, Site 191) was born to Mattie Carr and Marion Barry, Sr. in Itta Bena, Mississippi. It is unclear if Barry’s parents separated or if his father died when Barry was young. Regardless, Barry’s mother relocated to Memphis without Marion Barry, Sr. While in Memphis, Carr met and remarried a butcher, David Cummings. Together, Barry’s mother and step father raised eight children, including Marion Barry, Jr. In his childhood, Barry helped his mother and step father financially by picking cotton, waiting tables, bagging groceries, inspecting soda bottles, and delivering newspapers. In high school, Barry became an Eagle Scout.

In 1958, Barry earned a degree in chemistry from Lemoyne College in Memphis. During his sophomore year of college, Barry joined the Lemoyne chapter of the National Association for the Advancement of Colored People (NAACP). As a senior in college, Barry was the chapter President of the Lemoyne chapter of the NAACP. After earning his undergraduate degree, Barry went on to receive a Master’s degree at Fisk University in Nashville, where he organized a chapter of the NAACP for Fisk University. In 1960, while living in Nashville, Barry helped organize the first lunch counter sit-ins in Nashville. In April of 1960, Barry and some of his peers met with Rev. Dr. Marking Luther King, Jr. to establish the Student Nonviolent Coordinating Committee (SNCC), an organization that organized demonstrations, sit ins, and boycotts. Barry was elected as the first national chairman of the SNCC.

In 1966, Barry led a one day “mancott,” protesting a fare increase requested by the D.C. Public Transit.

After about two years in D.C., Barry created a job program, Pride Inc., for poor African-Americans living in D.C. and won federal grants worth several million dollars to help fund the program.

In February 1971, Barry won his first election for an at-large position on a citizen’s board designed to improve relations between police officers and African-Americans in Washington, D.C. Barry then became the President of the school board (1972-1974) and a city council member (1974). While serving on the D.C. Council, Barry was instrumental in defeating a 1% gross-receipts tax on all city businesses. Additionally, Barry fought for a pay raise for the D.C. police department, and he was an LGBTQ+ rights supporter. Consequently, Barry was a popular candidate during his first stint on the D.C. Council and received 78% of the vote to serve a second term.

In March 1977, Barry was shot by members of the Hanafi Muslim sect during a takeover of a Washington office building. The bullet narrowly missed his heart.

During Barry’s first term as mayor, downtown D.C. boomed, leading to the revitalization of several neighborhoods. Vacant lots became filled and abandoned buildings became offices, hotels, and restaurants; at least 23 million square feet of office and retail space was created downtown. The sports arena then known as the MCI Center was constructed. Barry was praised as a “national symbol of self-governance for urban blacks.” The programs initiated by Barry offered summer jobs for youth, home-buying assistance for working-class residents, and food for senior citizens. Barry was also recognized for his efforts in placing African-Americans in D.C. in upper and middle level management positions within the city’s government; many of these positions were previously “reserved” for white Americans. Barry also appointed about a dozen women to positions that were, at the time, not traditionally for women. Another accomplishment under Barry’s tenure included the institution of budgetary and fiscal accounting procedure for the D.C. government; D.C. had its first successful audit under Barry.

However, Barry’s critics complained that D.C.’s poorest neighborhoods were still deteriorating. Barry’s tenure as mayor coincided with a national cocaine epidemic. D.C. also had the highest infant mortality rate and highest homicide rate of any city in the United States while Barry was in office. Critics of Barry’s tenure as mayor argued that he neglected part of his duties. For instance, residents of a city-operated nursing home had limbs amputated due to infected bed sores and the fire department was unable to fight major fires. The dropout rates in high school were unusually high, while test scores were low. Crime and unemployment increased, and there were minimal improvements made in improving the efficiency of city agencies. Consequently, an estimated 115,000 people turned to the suburbs of D.C. in hopes of obtaining better educational opportunities for their children, having their garbage picked up consistently, and ensuring that the streets were plowed during snowstorms.

It is no secret that Barry struggled with alcohol and drug addiction, relapse, and recovery. In 1989, Barry was called before a federal grand jury, investigating whether a woman sold drugs to city officials, including mayor Barry. Barry acknowledged that he had a relationship with the woman but denied buying drugs from her. On January 18, 1990, Barry was arrested at Vista International Hotel while smoking cocaine and groping a woman. After a long trial, Barry was convicted of a misdemeanor of cocaine possession and sentenced to six months in prison. Additionally, Barry received treatment for addiction at a rehabilitation facility. The jury couldn’t agree on 12 other counts Barry was charged with, including three felony charges that he lied to a grand jury. If Barry had been convicted of the felony charges, he wouldn’t have been able to run for office.

In 1992, Barry was elected to a position in the city council. In 1994, Barry ran for mayor for the fourth time. Three months after the start of his fourth term, Barry unveiled a “miracle budged” that relied on Congress to provide hundreds of millions of dollars to bail out D.C. As a result, Congress quickly created the D.C. Financial Control Board to oversee city spending because members of the federal government complained of graft, corruption, and gross mismanagement of Barry’s administration. In August 1997, Congress essentially stripped Barry of most of his remaining power by turning nine major operating departments to the board.

On May 21, 1998, Barry announced that he wouldn’t seek another term as mayor and in 1999, Barry left the mayor’s office for good. Barry then worked as an investment banker. In 2004, Barry was elected to the D.C. Council, representing Ward 8. He still held this position on the city council when he died.

In 2009, Barry underwent a kidney transplant. It was combination of kidney disease, prostate cancer, diabetes, and hypertensive cardiovascular disease that led to Barry’s demise. 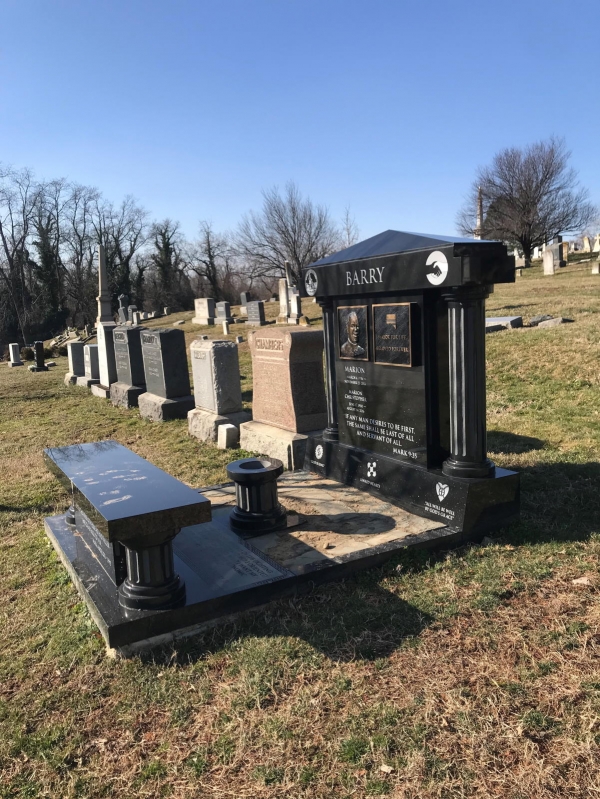