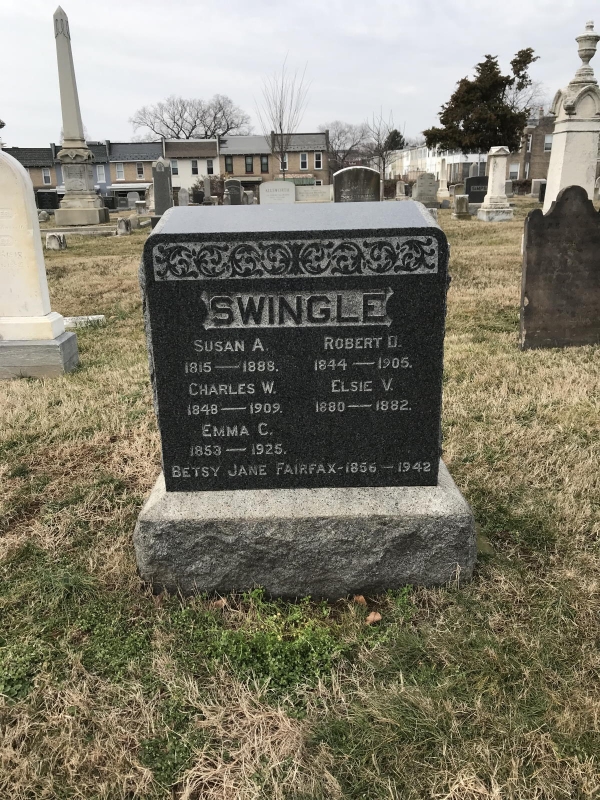 Betsy Jane Fairfax was born in Martinsburg, West Virginia. Fairfax was born into slavery and served the Swingle family for 80 years. She traveled with the Reed family, who were related to the Swingle’s, to Honolulu to help care for the Reed children. In her old age, she could still remember details from the Battle of Antietam. Fairfax also received an award from the District Federation of Women’s Clubs for her long and faithful service. Fairfax is buried in the Reed/Swingle family plot at Congressional Cemetery. 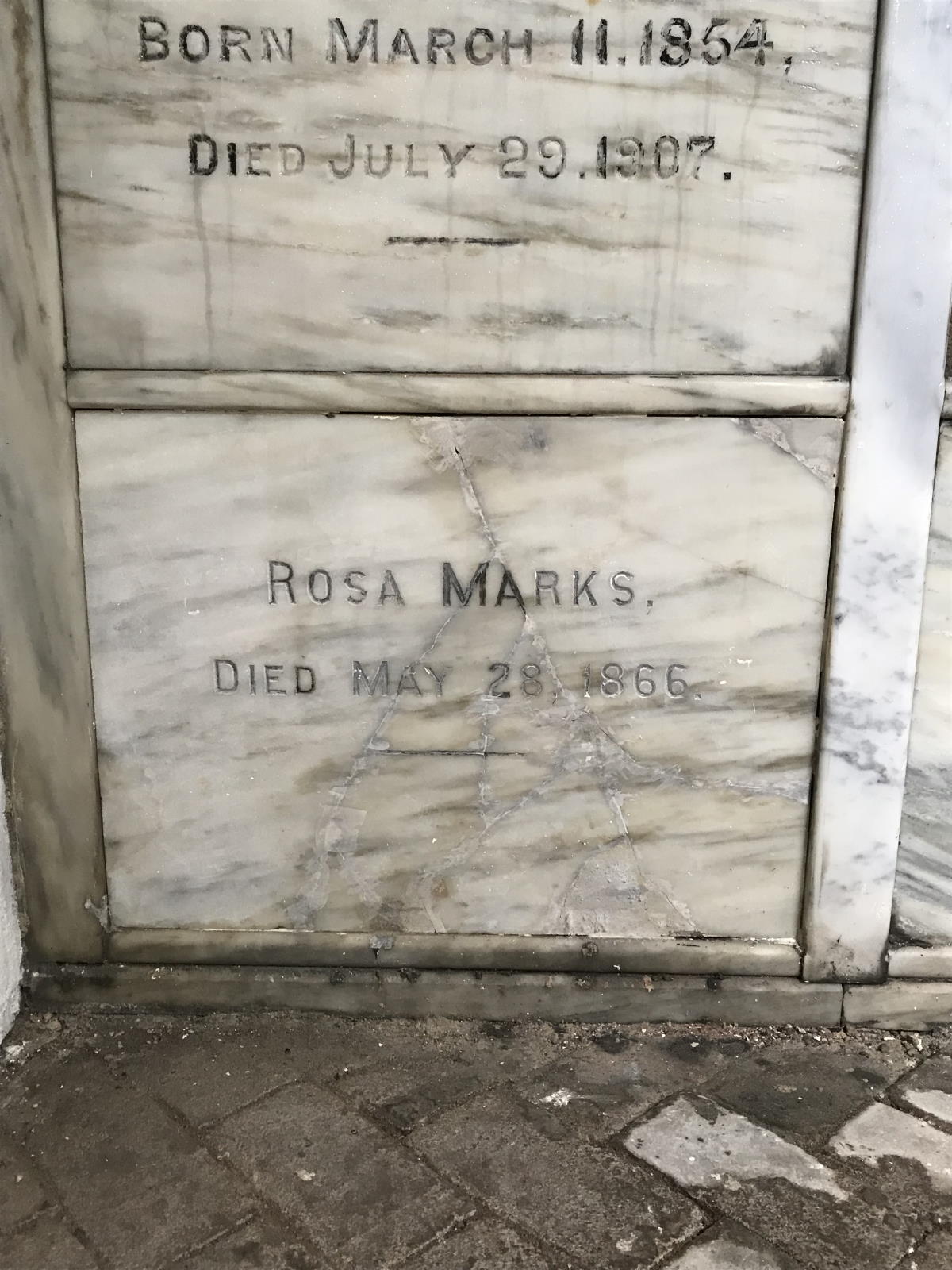 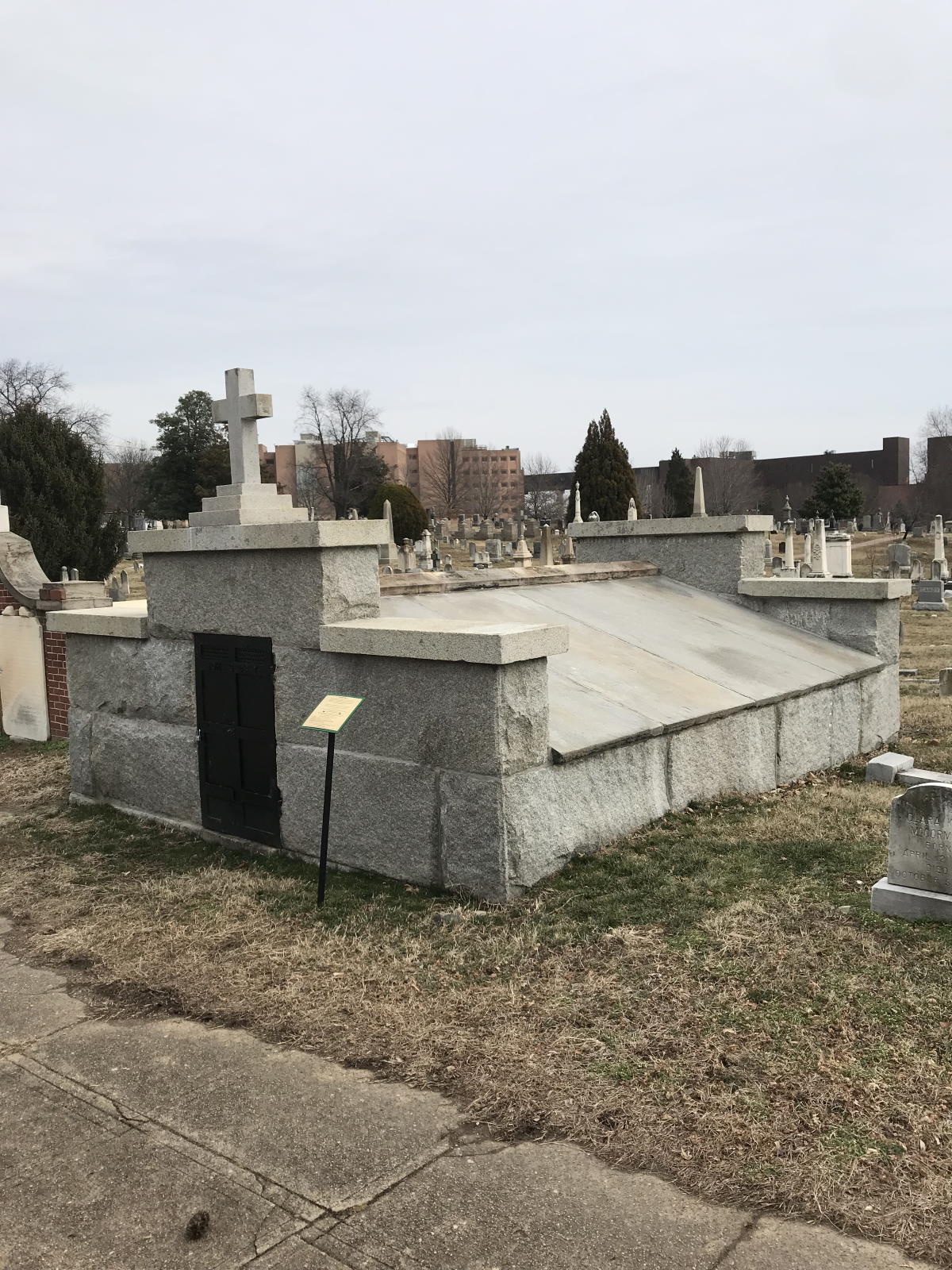 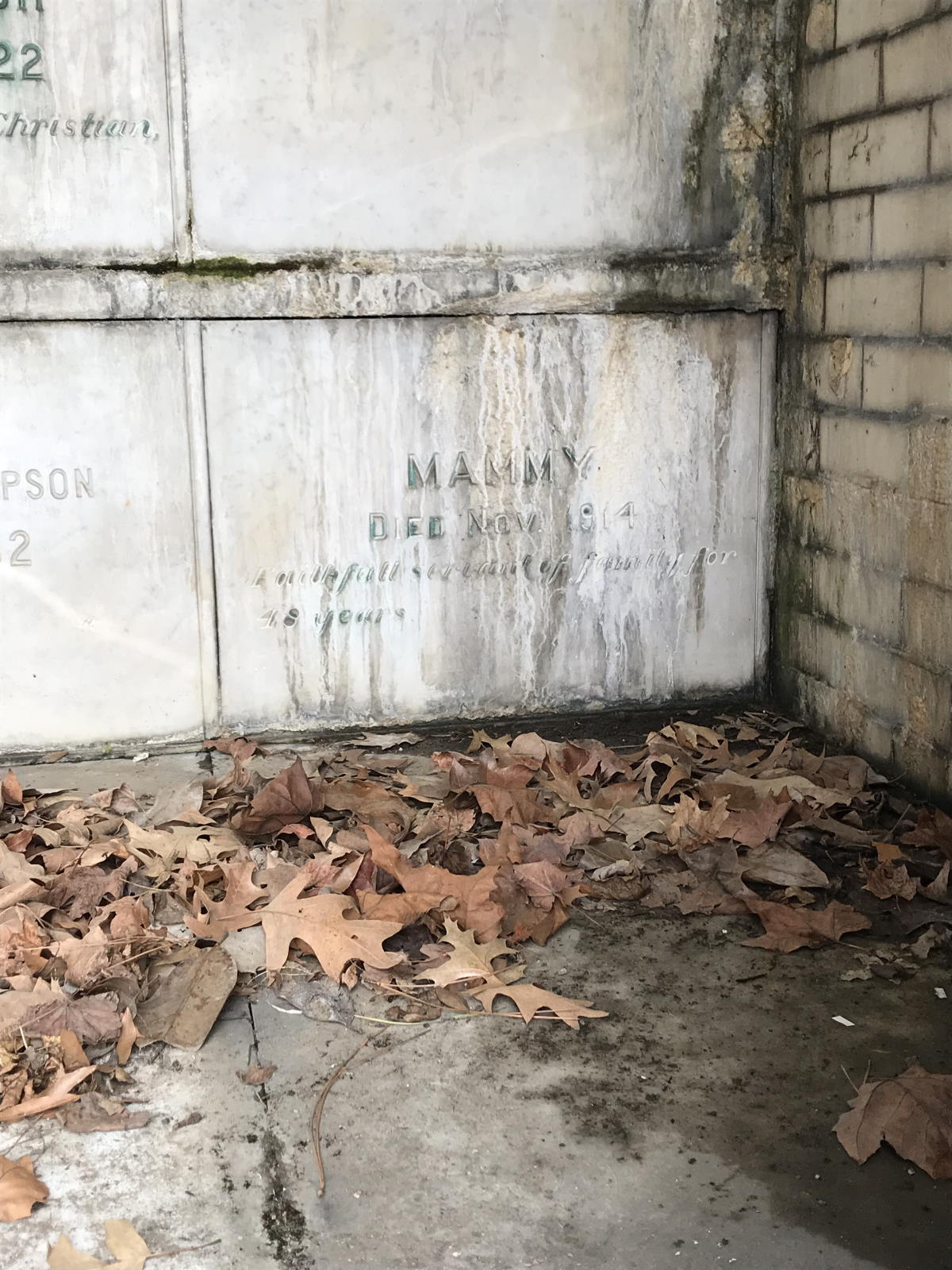 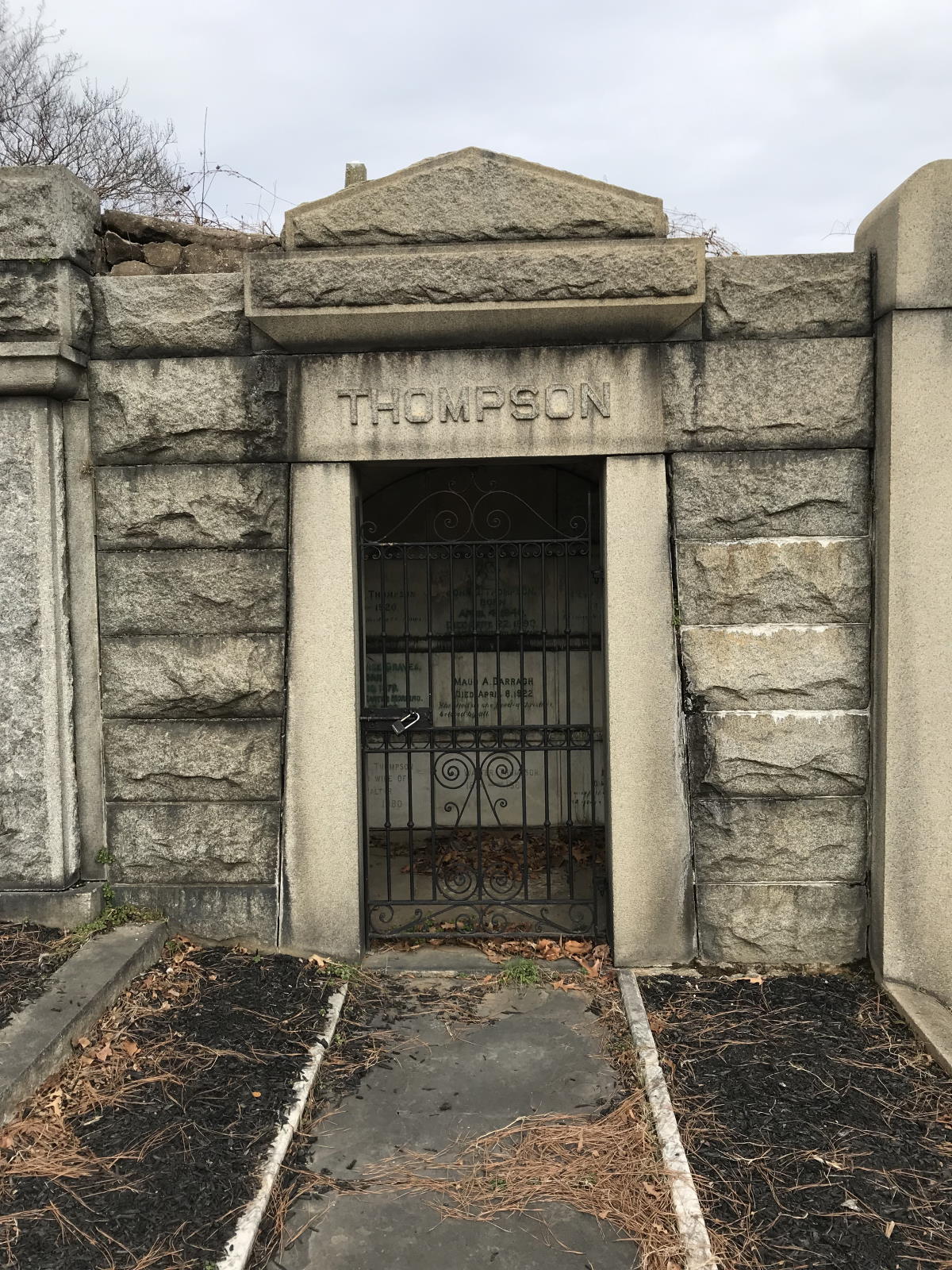 Like Rosa Marks, Lucy Gray is also interred in the vault of the family she served. Gray’s obituary states that she worked for Virginia A. Thompson for 48 years. On November 5, 1914, Gray died at the age of 65 years old. 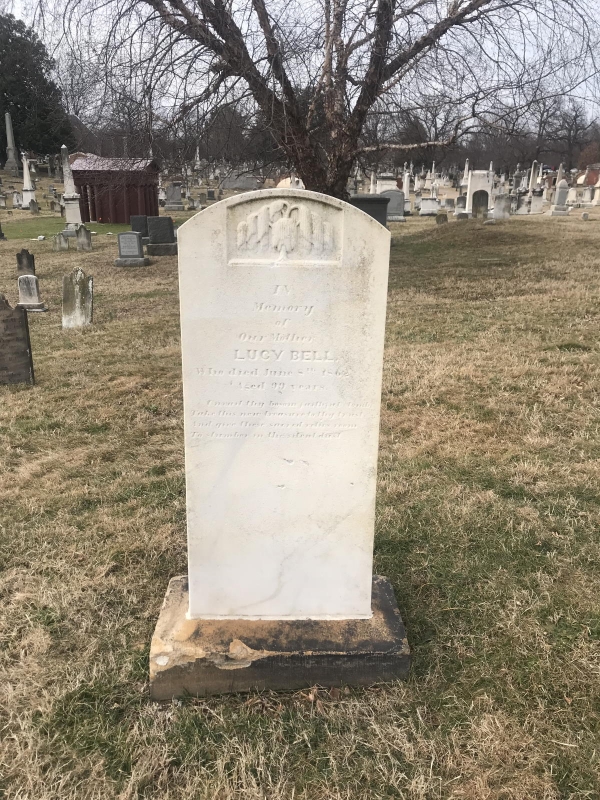 Not much is known about Lucy Bell, but there is a lot more information known about several of her children. Lucy Bell was born around the start of the Revolutionary War. Lucy Bell was the mother to at least five children: Ann, Daniel, Caroline, Prisseller, and Harriet. Although Lucy was born into slavery, by 1850, Lucy Bell claimed her freedom. Before 1796, Lucy Bell and an infant Ann were held as property of Gerrard Truman Greenfield. After the death of Gerrard Greenfield in 1796, Lucy became enslaved by Greenfield’s widow and Ann was enslaved by Greenfield’s son, Gabriel. In the 1820 census, Lucy was listed as living north of the Navy Yard. On June 8, 1862, Lucy Bell died.

Ann Bell was most likely the first in her family to arrive in Washington D.C. It is believed that she arrived in 1813 or 1814 with the permission of Gabriel Greenfield. Ann Bell conducted herself as a free person after she moved to Washington D.C. until 1836, when the Greenfield family claimed that Ann was enslaved. On December 24, 1836, Ann Bell filed a freedom suit in D.C.’s circuit court. The summons went unanswered because the defendant, Gerard Truman Greenfield, primarily resided in Tennessee, not Washington D.C. Ann Bell’s case focused on her freedom and whether or not she was freed by the 1815 will of Gabriel. P. T. Greenfield. In 1840, Ann Bell’s petition for freedom went to trial. The jury gave Ann Bell of verdict in support of Bell’s freedom because she purchased real property, built a house, and hired a servant from the defendant. On April 15, 1890, Ann Bell was granted her freedom, making her the only member of the Bell family who successfully won her court case. Ann Bell lived with her great-niece, Caroline (Daniel Bell’s daughter), in 1870. Ann Bell died on May 3, 1873. She is buried in the same plot as her mother, Lucy Bell.

In February 1848, Daniel Bell reached out to a ship captain, Daniel Drayton, who was affiliated with anti-slavery circles. Although initially hesitant to help the Bell family due to a lack of a vessel, Drayton made arrangements to charter a ship, the Pearl, to Washington to rescue the Bell family. Daniel Bell’s plans spread throughout Washington D.C. By the time the Pearl left the wharf on April 15, 1848, over 70 people were on board. On the morning of April 18, 1848, a steamer was sent out by slaveholders who learned about Daniel Bell’s plot. By 7:30 am, the vessels were docked back in Washington D.C., and the people on board of the ship were sent to the prison before ultimately being sold back to slavery. Daniel Bell was able to purchase his wife Mary and two of his children with help from Thomas Blagden, a lumber merchant who lived near the Bell family when the family lived at the Navy Yard.

The next blog post will provide more information about the Pearl.