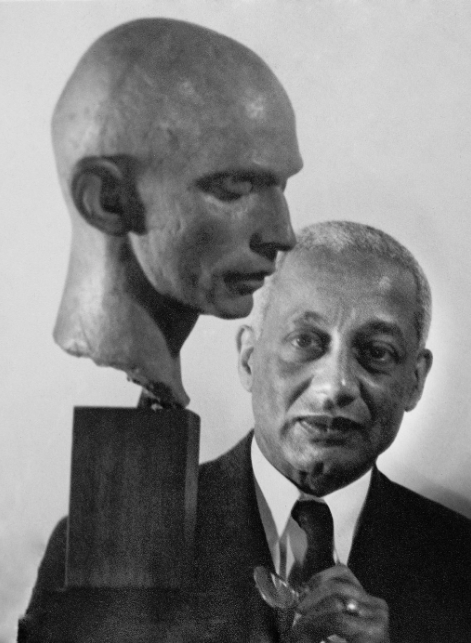 Alain Locke was born September 13, 1885 in Philadelphia, Pennsylvania to Pliny Ismael Locke and Mary Hawkins Locke. Pliny Locke obtained a law degree from Howard University and worked as a mail clerk in Philadelphia, while Mary Hawkins Locke worked as a teacher. The Locke’s were engaged for 16 years and only had one child, Alain. When Alain Locke was six years old, his father died, forcing his mother to financially support him through teaching. At some point in his childhood, Alain Locke contracted rheumatic fever, permanently damaging his heart and restricting his physical abilities. Consequently, Locke spent much of his childhood reading and playing both the piano and violin.

A 1949 note written by Locke revealed both his reflection and struggles with the intersectionality of his identity: “Had I been born in ancient Greece, I would have escaped the first [his sexual identity]; in Europe, I would have been spared the second [U.S. racial segregation policies and discrimination]; in Japan I would have been above rather than below average [height].”

In his short life, Locke made several notable accomplishments. One of Locke’s most notable accomplishments was that he became the first African-American and openly gay man to be awarded a Rhodes scholarship to Oxford University. Furthermore, Locke is credited as one of the “originators” of the Harlem Renaissance and New Negro movement. Locke contributed to both movements by: promoting and emphasizing values, diversity, and race relations; and encouraging and challenging African-Americans to identify, appreciate, and embrace their cultural heritage–along with the traditions of other cultural groups–while simultaneously making the effort to integrate into the larger society.

Locke was clearly well-educated, which established a foundation for his career and his role in both the Harlem Renaissance and the New Negro movement. From 1904 to 1907, Locke attended Harvard University, completing a four-year philosophy degree in only three years and graduating magna cum laude. While at Harvard University, Locke was elected to Phi Beta Kappa, a highly distinguished honor society, and won the Bowdoin Prize. Locke then attended Oxford University from 1907 to 1910, where he received another undergraduate degree in literature. Locke was the first African-American Rhodes Scholar. The next African-American Rhodes Scholars were not until 1963, when John Edgar Wideman and John Stanley Sanders were selected. While it is uncertain if the 1907 selection committee members knew that Locke was African-American when they selected him as a scholar [although evidence has been discovered that they may have known], it is certain that some of Locke’s fellow American colleagues were not “ready to share the pedestal with a black man” and refused to live in the same Oxford college. In 1911, Locke attended the University of Berlin in Germany. About a year later, Locke became an Assistant Professor at Howard University in Washington, DC. Locke later returned to Harvard University in 1916, where ultimately earned a PhD in Philosophy in 1918, before he rejoined the faculty as a full-time Philosophy professor at Howard University. In 1921, Locke became the chair of the Philosophy department at Howard University and remained in that position until he retired in 1953. Upon his retirement, Locke was awarded an honorary doctorate from Howard University. Throughout his academic career, Locke closely studied African culture and traced its influences on western civilization. Primarily through his career and efforts in vocalizing his ideas about the role of African-Americans in American society, Locke established close relationships to Langston Hughes, Countee Cullen, Jean Toomer, Rudolph Fisher, and Zora Neale Hurston. Furthermore, Locke is said to have inspired Martin Luther King Jr., who considered Locke to be an “intellectual leader on par with Plato and Aristotle.” 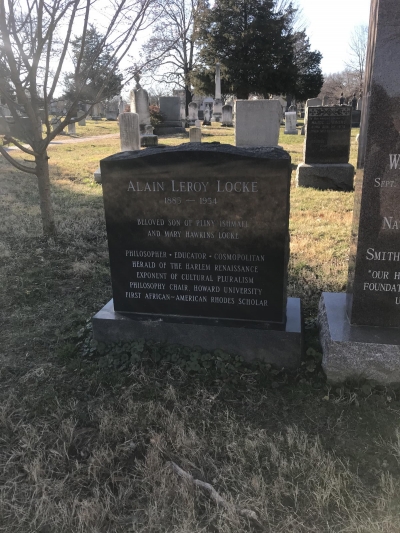 Throughout his career, Locke made significant contributions to the field of philosophy. Locke emphasized the necessity of depending on and determining values to help guide human conduct and interrelationships. Furthermore, Locke praised the idea of respecting the uniqueness of each personality in a society because he believed that this respect would allow personalities and society to fully develop and remain unique within a democratic ethos. Locke also argued that race is a fabrication and that culture created visions and interpretations of race. This was a shocking statement to make during a time when he—and other African-Americans—faced segregation and discrimination daily. Locke is considered one of the founders of pragmatism. However, pragmatists did not include him in their history because they believed that his ideas were a reflection solely of African-Americans.

Locke familiarized American readers with ideas and key people in the Harlem Renaissance and New Negro movement. For example, Locke edited a special issue for Survey Graphic in March 1925, which expanded into the New Negro, an anthology of fiction, poetry, drama, and essays. Additionally, Locke edited the “Bronze Booklet” studies of cultural achievements by African-Americans, annually reviewed literature by and about African-Americans in Opportunity and Phylon, and frequently wrote about notable African-Americans for the Britannica Book of the Year. Locke’s published works include: Four Negro Poets (1927), Frederick Douglass, a Biography of Anti-slavery (1939), Negro Art: Past and Present (1936), and The Negro and His Music (1936). Before his untimely death, Locke was working on a manuscript for a definitive study on the contributions of African-Americans on American culture. While this manuscript was left unfinished, it formed the basis for Margaret Just Butcher’s The Negro in American Culture (1956).

Locke encouraged African-American painters, sculptors, musicians, and other artists to utilize African sources for inspiration in their work. Specifically, Locke encouraged artists to reference African sources to better understand African and African-American identity and discover African-based materials and techniques to create and express different art forms. In literature, Locke pressed African-American authors and writers to explore subjects in African and African-American life and to set high artistic standards for themselves. Additionally, Locke was an early advocate for recognizing the importance of African-American slave songs and spirituals to better understand America’s musical history. Locke claimed that “the very element that make them [slave songs and spirituals] spiritually expressive of the Negro make them, at the same time, deeply representative of the soil that produced them…They belong to a common heritage.”

After his death, Locke was cremated and his ashes were given to his close friend and executor, Philadelphia activist and educator Arthur Huff Fauset. When Fauset died in 1983, his niece, Conchita Porter Morrison, contacted Rev. Sadie Mitchell to act as an intermediary between Morrison and Howard University.

In the mid-1990s, J Weldon Norris, Howard University’s coordinator of music history, was visiting St. Thomas Church for a concert when Rev. Mitchell approached Norris, asking to give him Locke’s cremains to take back with him to Howard University.

Locke’s papers are housed in several gray archival boxes at Howard University’s Moorland-Springarn Research Center. Locke’s cremains were also stored inside a brown paper bag in the research center. The paper bag was inscribed with “Cremains given to Locke’s friend Dr. Arthur Huff Fauset. Arthur is deceased. I kept the remains to give to Howard. —The Rev. Sadie Mitchell, Associate of St. Thomas Church.” In 2007, the cremains were transferred to Howard University’s W. Montague Cobb Research Laboratory in 2007. This lab also housed the remains from New York’s African Burial Ground along with 699 [mostly] African-American skeletons. Mack Mack, the director of the lab, ensured that the cremains were repackaged in a simple urn. Locke’s remains then stayed in the urn at the lab until spring 2014. 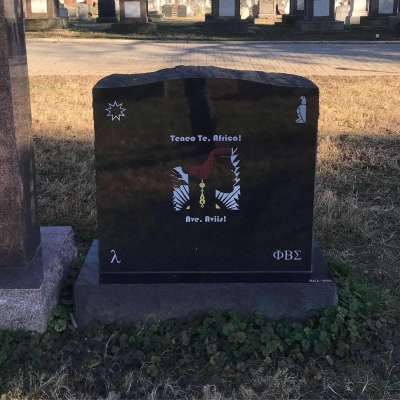 60 years after his death, Locke was finally given a permanent resting place at Congressional Cemetery (Range 62, Site 90). The funds for Locke’s inurnment and memorial service were planned and funded by African-American Rhodes Scholars. Locke’s plot location is very fitting—his plot is adjacent to the first director of the Smithsonian’s National Museum of African Art, Warren Robbins. Locke was not buried with his mother at the Columbian Harmony Cemetery because the cemetery is now a metro station. In circa 1959, 37,000 graves from the Columbian Harmony Cemetery were transferred to Landover, but these graves were left unmarked.

Locke’s black granite gravestone is inscribed with four symbols on the western elevation. The symbols are: a 9-pointed Baha’i star; a Zimbabwe bird, representing the African country formerly called Rhodesia, which the American Rhodes community adopted; a lambda, representing gay rights; and the Phi Beta Sigma symbol. A simplified reproduction of a bookplate created by Harlem Renaissance painter Aaron Douglas sits at the center of the stone. The emblem portrays a dramatic art-deco depiction of an African woman’s face set against a sunburst. The words “Teneo te, Africa” translate to “I hold you, my Africa.”