Previous Next
The Public Vault 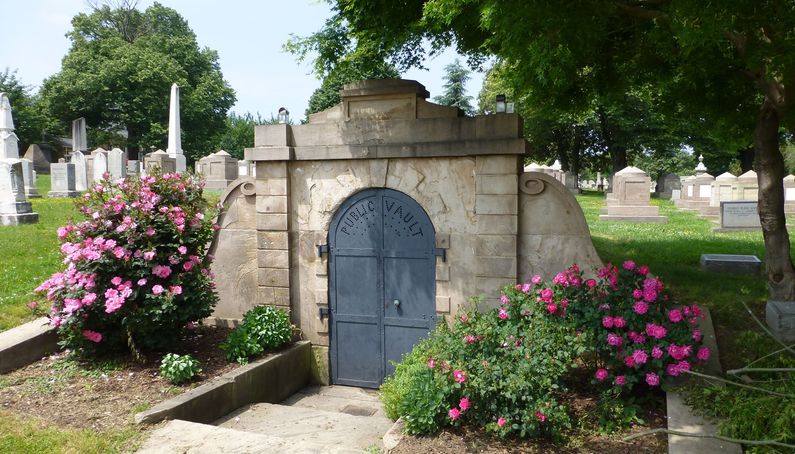 In the middle of the cemetery, there is a vault like no other vault in a U.S. cemetery. This vault is called the “Public Vault,” and, unlike receiving vaults at other cemeteries, its construction was fully funded by Congress in the mid 1830s. The Public Vault was intended to be used as a temporary holding place for bodies while funeral arrangements could be made. Anyone had the ability to use the Public Vault. However, the general public paid $5.00 to use the Public Vault. $1.50 of this $5.00 went towards the sexton for his services, while the rest of the money went towards the improvement and maintenance of the grounds. Congressmen, on the other hand, had free access to the Public Vault. The remains and bodies of over 3,000 people have been placed temporarily in the Public Vault. Most bodies only stayed in the vault for one to two days because the vault was never meant to be a permanent burial-place for anyone.

The bodies of several notable people have been placed in the Public Vault, including Vice President John C. Calhoun, First Ladies Louisa Adams and Dolley Madison, and Presidents John Quincy Adams, William Henry Harrison, and Zachary Taylor. President William Henry Harrison’s body was in the Public Vault longer than he was in office. First Lady Dolley Madison’s body remained in the vault for about two years before James Causten, Dolley Madison’s niece’s father-in-law, had her body moved to the Causten family vault across the pathway. Dolley Madison remained in the Causten vault until her interment at Montpelier in 1858.

The Public Vault was made out of Aquia Creek sandstone. This particular type of stone was readily available along the Potomac River, could be easily carved, and had “warm tones.” Unfortunately, the stone is not the most durable.

In the 1930s, the Public Vault fell out of regular use. This is, at least in part, due to the increasing popularity of embalming and the use of funeral homes along with advancements in transportation.

In 2003, the Public Vault was in “sad shape,” with doors hanging by a “thinning strip of a wrought iron hinge.” Consequently, the federal government allocated funds to pay for the restoration of the Public Vault.

The doors of the Public Vault recently had improvements made to them, and a railing was added to the stairs on the interior of the vault. Additionally, the interior and exterior both received a fresh coat of paint (using a lime-based paint), and dirt was removed from the top of the vault to allow the plaster to breathe. Today, the vault is used for various events at the cemetery, and is a popular stop on tours through the cemetery.

Johnson, Abby Arthur., and Ronald Maberry. Johnson. In the Shadow of the United States Capitol: Congressional Cemetery and the Memory of the Nation. Washington: New Academia Publishing, 2012.