In 2003, when the Architect of the Capitol (AOC) assessed all of the structures at Congressional Cemetery, the White Vault was in dire condition.  Structural elements were severely deteriorated or missing altogether.  Brick was spalling, sandstone delaminating, ironwork corroding, and mortar had essentially disappeared from the majority of the structure.  All of these conditions can be attributed to normal ageing and weathering, so there was no suspicion of foul play in the deterioration of this structure.  The White Vault needed attention. 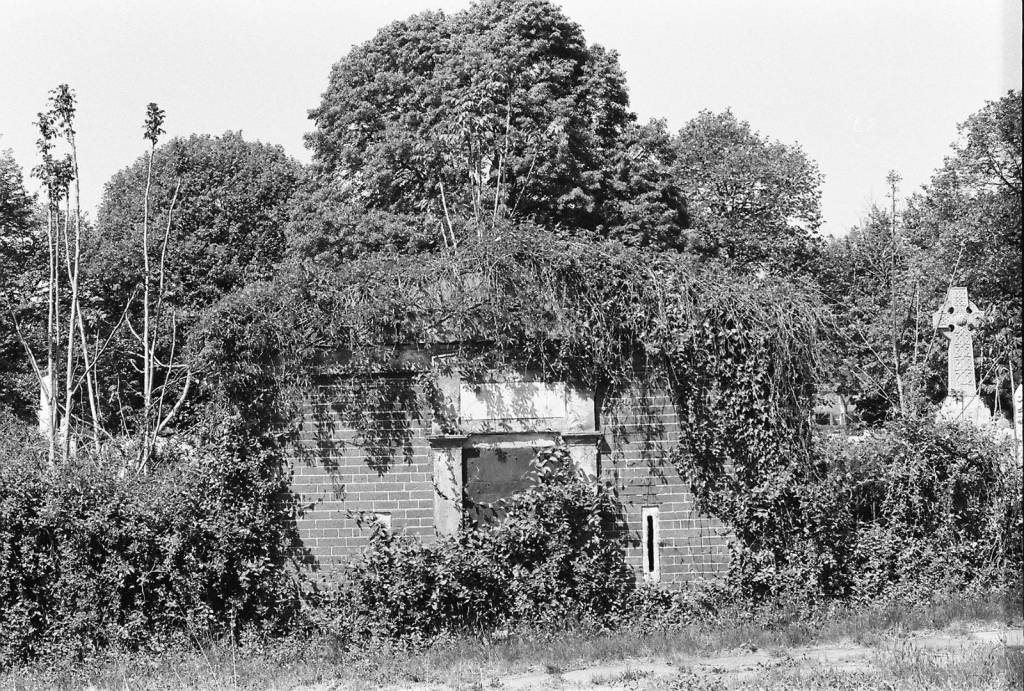 Image of the White Vault from the 1970s.

The AOC prioritized regrading, repointing, replacing missing structural elements, and rebuilding a failed wall, and also recommended that the sandstone and ironwork be repaired.  While the interior did not show significant signs of deterioration, it would only be a matter of time based on the failing condition of the exterior.

Work started on the vault in May 2009.  The Architectural Preservation Services, LLC (APS) performed their own condition assessment and came to the same conclusion as the AOC.

Their treatment started by methodically matching the mortar based on strength, color, and texture of existing mortar. 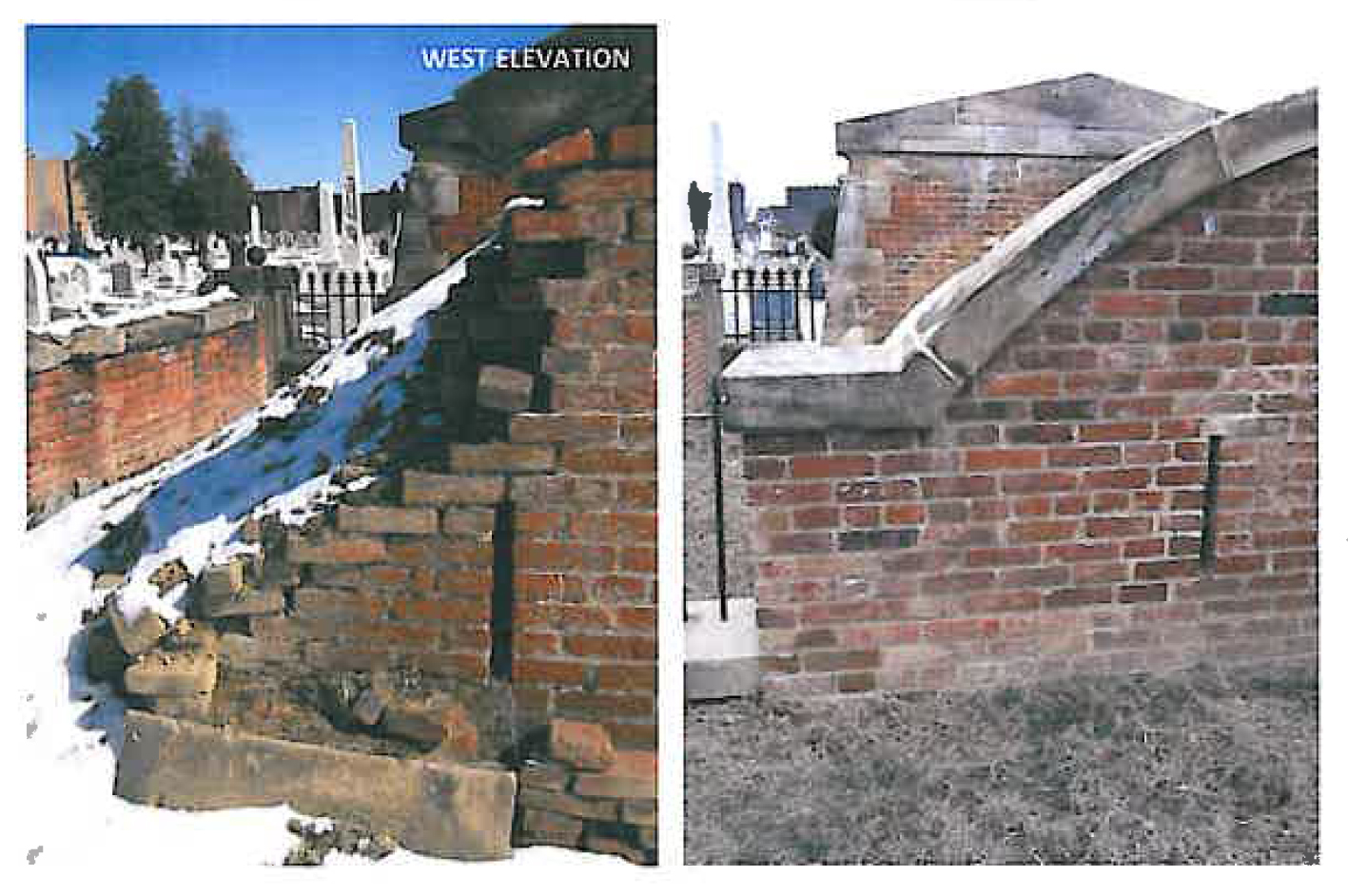 Before and after of the west elevation.

Aside from spot testing, the vault required three different cleaning agents: one for biological growth, one for brick, and one for sandstone.  The varying properties between brick and sandstone produced different cleaning needs, especially considering the porosity of sandstone which allows pollution to penetrate easily.

They chose to remove all of the mortar by hand.  It was decided that three of the walls would need to be disassembled and reconstructed due to the loss of brick and mortar.  The only wall that stayed intact was the front façade, which only needed to be repointed.

To solve the issue of deteriorated sandstone capstones and vents, APS did a combination of patching and replacement-in-kind.  Six out of four capstones had to be completely replaced with Aquia Creek sandstone.

The ironwork went on a trip to the Worcester Eisenbrandt studio to be cleaned, corrosion removed, and repainted.  To avoid future rust-jacking, the iron fence was not reinserted into the sandstone.

Performing a structural investigation on the barrel vault, APS found significant mortar failure due to soil and roots covering the structure.  It was deemed inappropriate to cover the vault with sod, and a three-part parging was applied as the solution.  Over the course of several years, the failure in the parging and need for repair has indicated that the vault foundation is not completely stable. 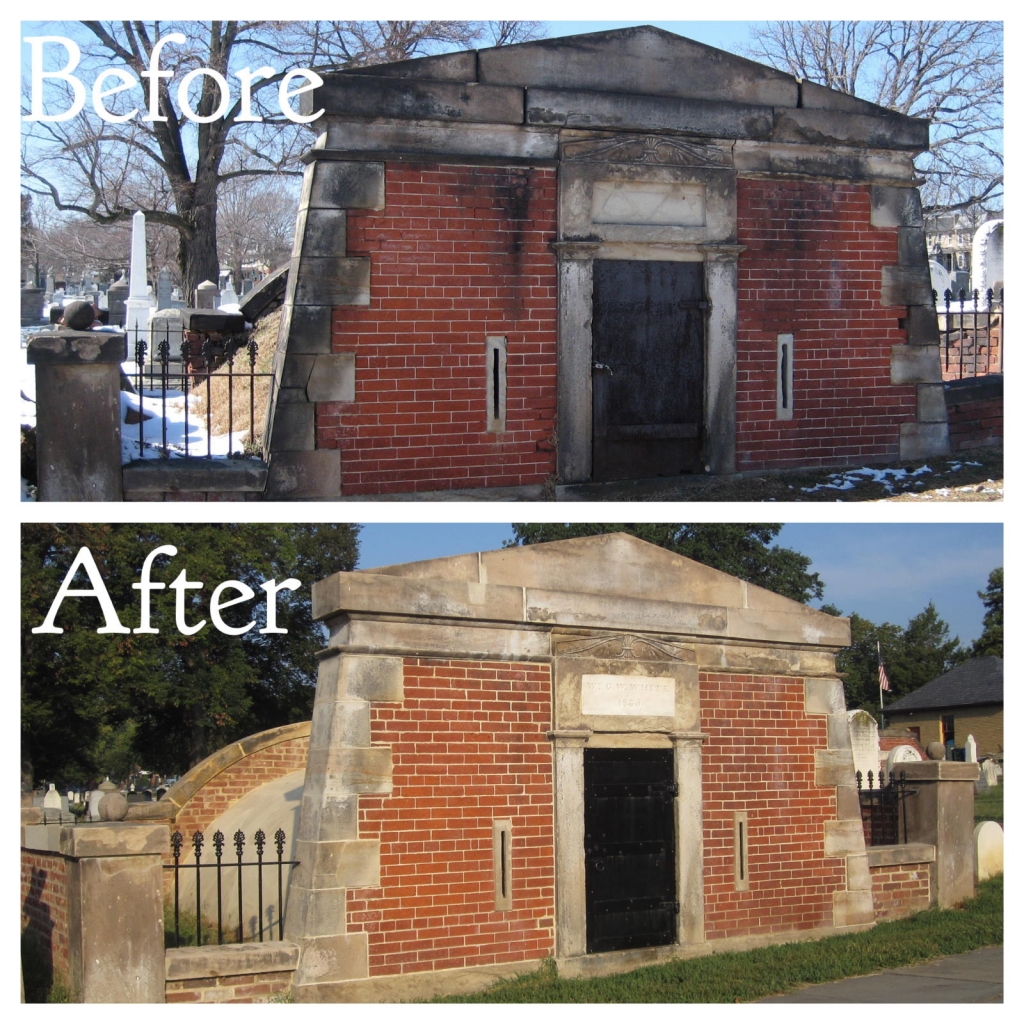 Recently, the White Vault restoration saga came to a close, as much as any restoration project truly can.  In order to properly restore the vault, the bodies were removed by the Smithsonian.  The team of experts analyzed the remains and conducted extensive genealogical research – all at no cost to Congressional Cemetery.  The remains were rehoused and reinterred in late May, and commemorated with a small private ceremony.  Thanks to the generosity of the Smithsonian, we now have invaluable documentation about the White family.

As with all of our memorials and tombs, there is a need for ongoing monitoring of the White Vault, but we are confident that the vault is now a proper environment for the White family to rest in eternity.