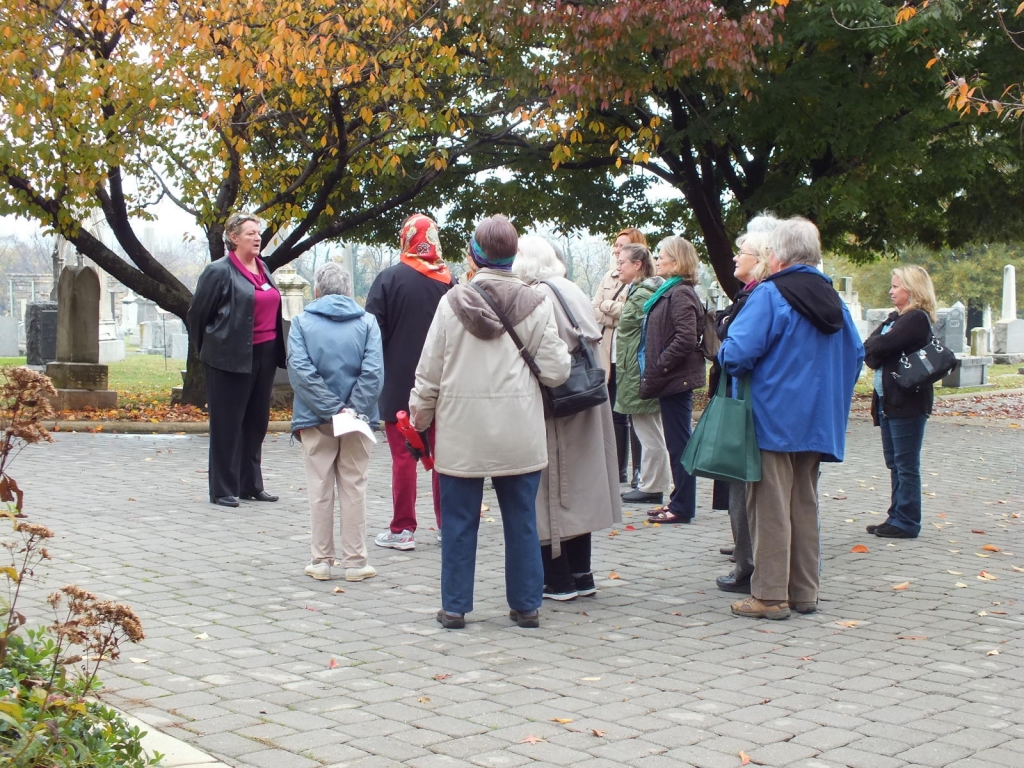 Archivist and docent Dayle Dooley giving a tour at the cemetery.

What kind of questions do visitors ask when touring the storied grounds of Historical Congressional Cemetery (HCC)? A zinger is always possible, but for the most part, questions are fairly predictable.  Here are three questions commonly asked and answered by three of our volunteer docents:

Are there any African Americans buried at Congressional Cemetery?

Yes, but, it was more likely that an African American back in the day would be buried at a cemetery catering to “colored people,” like Woodlawn.  Docents tell me, however, that it was not uncommon for endeared black slaves and servants to be buried with the white families they spent their lives serving.  While HCC never formally discriminated, it was typical of most institutions at that time in that informal cultural segregation was the norm.

Today, of course, neither formal nor informal segregation is permitted and the cemetery is proud that the next of kin of such prominent African Americans as Marion Barry and Alain Locke chose us as their final resting places.

Is anything really haunted? Most docents try not to answer this question directly.  But if you believe in ghost stories, then sure, the cemetery is haunted.  Most of our restless spirit residents are known to leave cemetery grounds to do their haunting taking up residence where they last lived rather than where their remains remain.  David Herold, John Wilkes Booth’s accomplice; Archibald Henderson, of Marine Barracks fame; Thomas Tingey, of the Navy Yard and Robert Slight, the worker on the Capitol who fell to his death; are all interred at HCC, but do their haunting elsewhere.

One resident, Civil War photographer Matthew Brady, however, does his haunting at HCC.   Congress promised to pay him for war photos, but reneged, leaving him penniless. Brady has been known to stroll among the cenotaphs dunning Congressmen for compensation.  No rest for the weary.  And of course, who can forget John Phillip Sousa? On foggy evenings the legendary Marine Corps bandmaster is said to play his sousaphone.

What do I have to do to “get into” Congressional Cemetery?

Visitors are often awed by the large number of famous people residing at HCC.  With so many politicians, activists, artists and business leaders buried here, many think plots are only available for Washington’s elite.  That’s not the case; there are all sorts of people buried here.  The snarkiest of all HCC docents, Tim Krepp, said getting into Congressional Cemetery is a two-part process: “first, you have to die; second, you have to make sure your check clears.”

For information about docent led tours of Historic Congressional Cemetery check out the schedule here: https://congressionalcemetery.org/events.asp

Thanks to docents Tim Krepp, Susan Wagner and Robert Pohl.