Mayors of the City of Washington

Previous Next
Mayors of the City of Washington

In the late fall of 2014, Historic Congressional Cemetery was honored to be chosen as the final resting place of Marion Shepilov Barry, Jr. (1936-2014), who served two terms as mayor of Washington, DC.  He is considered to have served as the capital city’s second mayor from 1979 to 1991 and its fourth, from 1995-1999.  Like all politics in Washington, DC, it’s not that easily defined: Throughout the evolution and growth of the city, many don’t realize that the City of Washington had dozens of mayors in its early history from the time it was granted a formal government in 1802.  Congressional Cemetery happens to be the final resting place of a total of eleven former mayors, including Barry.

The early Mayor of Washington had authority over city services, appointments, and local tax assessments, however, the duties of the mayor mostly consisted of requesting appropriations from Congress to finance the city.  From 1802 to 1812, the mayor was appointed by the President of the United States; between 1812 and 1820, the city’s mayors were selected by a city council.  From 1820 to 1871, the mayor was popularly elected.  Congress formed a territorial government headed by a governor appointed by the President.  Due to alleged mismanagement and corruption, including allegations of contractors bribing members of the District legislature to receive contracts, the territorial government was discontinued in 1874. 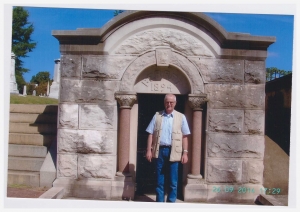 In the summer of 2014, a German citizen named Wolfgang Berret visited the cemetery looking for the gravesite of his great grandfather, James G. Berret (1815-1901) who just happened to have served as the 18th Mayor of the City of Washington.  The young Berret was thrilled when HCC staff showed him the impressive final resting place: the Berret mausoleum, the first impressive structure along our mausoleum row.  Wolfgang Barret is pictured here in front of the granite structure.

James Gabriel Berret was an American politician who served as a Maryland state legislator from 1837 to 1839 and as Mayor of the City of Washington from 1858 to 1861, when he was forced to resign from office after being jailed by the Lincoln administration for sedition.

Berret was born in Maryland on February 12, 1815.  When he left the Maryland legislature he was appointed to an office in the US Treasury by President Martin VanBuren.  He served in the Treasury until 1853, when President Franklin Pierce appointed him Postmaster of the District of Columbia.  He served on the inaugural committee for Presidents James Buchanan and Abraham Lincoln. 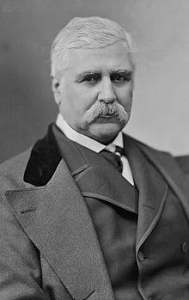 With the outbreak of the Civil War in 1861, the Republicans in the US Congress pushed through legislation that required all public officers in Union territory to take oaths of allegiance to the United States.  When Berret refused, insisting that his oath as mayor of the nation’s capital should suffice, Secretary of State William H. Seward had him arrested, jailed in the Old Capitol Prison, then sent to Fort Lafayette, New York.  Three weeks later, when no evidence of collaboration with the enemy surfaced, Seward had Berret released and returned to Washington – on the condition that he immediately resign as mayor. Berret telegraphed his resignation to the Washington City Council, who had already elected Richard Wallach to replace him.

Berret eventually became friends with Lincoln, although he declined when the President offered to appoint him commissioner of the emancipation of slaves in the District of Columbia. However, he accepted Ulysses S. Grant’s nomination to the board of police commissioners in 1872.  He later served on the inaugural committee for President Grover Cleveland.   Berret died April 14, 1901.  His last residence in Washington was at 1535 I Street N.W.

Mayor’s interred at Congressional Cemetery include: